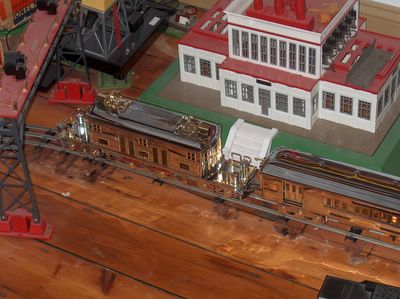 Thought I would liven things up a bit with a nice President's Special chugging by the old Power Station!

Ya gotta read this...

Ward Kimball put out a book about Walt Disney and it is one of the most interesting reads around. Check out the link.

It really does say something about the spirit of entrepenuers and inventors at the time of Disney. I wonder if we haven't lost some of the kind of whackiness this guy had...

He once said to me, "I love Mickey Mouse more than any woman I've ever known."

I think we need more imagination and passion, it's part of why we play with trains!

Marc
Posted by Standard Gauge Blogger at 1:14 PM No comments:

Have no fear, I have been working my rear off this summer and I haven't had a second to post diddly. I did have some time to do some research so I have some interesting stuff to post on some manufacturers that we have discussed a little.

Dick Mayer (who is producing his last round of tinplate right now), Jerry Brown and John A Daniels come to mind. So does Voltamp and a few others we all love.

Some of my offline time has been looking at how to put more media into the blog. I have plenty of great Quicktime movies of trains as well as PDF's of some original TCA articles.

In doing some of my research through old TCA Quarterly's, I have definitely seen a trend, not through months or years but through decades. Going back to the 70's and 80's, there was still a predominant amount of die hard tinplate discussion in the Q and the Postwar nostalgia, while somewhat prevalent, was not the entire discussion. It seems that as the market turned into the Postwar wind, so did much of the focus of many fellow collectors.

Re-living your childhood isn't a bad thing but when I was a kid, I was exposed to literally every kind of train you can imagine. I just happen to like prewar trains the best.

After pouring over about 25 years of Q's and a decent amount of vendor literature, the direction is still predominantly postwar Lionel. No suprise there, especially based on the demographic the companies are catering to. I wonder though, especially with the economy constantly shifting, who is going to buy all these $700 plus GG1's? I know TCA membership is up but I still have to wonder how many folks are just happy with a few trains and a little oval of track?

How much computer stuff do we actually need to stuff into a train? Being that silicon is mostly sand, when will prewar (Prewar Iraq that is) toy trains wear out? I hate sounding cynical but I don't want to see toy trains completely fall into the conundrum of the commodity world (like computers). I put on my Star Trek McCoy (Bones) hat: "Dammit Jim, these are toys, not computers!", "I see no reason why a healthy toy shouldn't last for at least as long as a Vulcan". Ok, I am back from the Star Trek Convention.

I guess after eyeballing all this material for some articles I am going to write (and hopefully republish PDF's for you to look at the original content), I wonder if and who will rediscover the Carlisle and Finch, Voltamp's or Dick Mayer creations?

One that caught my specific interest was the a neat story (which shall get posted shortly) on how the Toonerville Standard Gauge trolley came to be in the 80's.

Marc
Posted by Standard Gauge Blogger at 12:49 PM No comments: