So a minor confession: I really love stubby trains.  These are trains that are truncated or shortened.  Shorter, designed atypically with one truck and made to work in a very small space and with very tight curves.  There are prototypes for truncated or shortened trains.  Mining was the most common (plenty of mining trains can be seen elsewhere on this blog).  Mine cars and mining trains have been modeled extensively in the toy train world and actually for a very long time in standard gauge.

What set me off on this discussion/tangent was that one of my relatives sent me some RMT trains over the holidays.  I have to say, they are really nice.  Ok, full disclosure: I like all toy trains, not just standard gauge.  I have quite a few Postwar trains from Lionel, MTH and so on.  I am so ashamed!  Ok, not really.

The RMT trains are really nice, mostly because I do not have a layout with a huge footprint and I tend to like trains that I can whip around the layout quick and not have them fly off the track.  The RMT trains are well done, they have substantial attention to detail, they are unique and they run extremely well.  I got to thinking though, how interesting it is that standard gauge never really embraced the modified trains like O gauge seems to.  Check out the New York Central set with the one truck passenger cars.  I am probably going to pick up a few more of these cars.  They have people inside and are really well articulated.

By the way, for the Youtube videos I'd recommend watching them directly on Youtube.  For some reason the software Google uses for the web log (Blog) truncates the video for the web page.  You'll get a better idea of how nice these trains are if you can blow up the video to your full screen size. 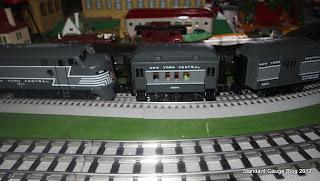 Blow up these pictures, click on them.  I used a really nice camera to take the shots, you should be able to see the detail. 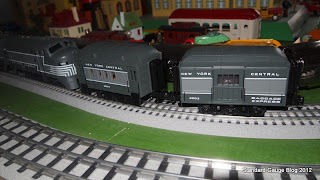 So after I really ran the RMT New York Central Set, I started thinking about the standard gauge "Shorty's" that I have.  Somewhere I have a McCoy Black Diamond set I have to try out.  But I use the below sets all of the time.  These are mostly from Joe Finelli.  He is a very talented artist/train maker and he has made several of these sets and put them out on eBay and sold them to TCA Members and collectors. 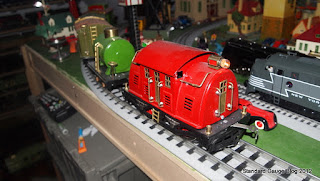 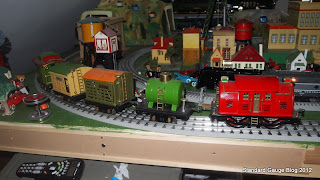 Check out the coal train.

Here is a Pride Lines Voltamp Set.  It runs like a champ and was one of John's last creations.  He will be missed, this set has it all, classic styling, great running and a prototype to match it from the early days of railroading.  The colors on it are fantastic. 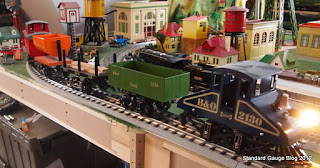 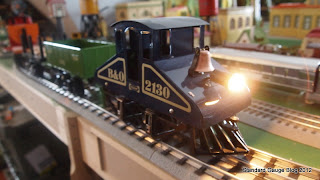 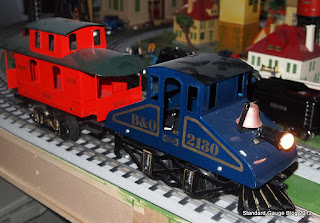 The neat thing about shorty's (truncated trains) is that they look great even when there isn't a substantial amount of rolling stock or passenger traffic.  And by the way, I've seen plenty of pictures of Steeple Cabs pulling a single car or caboose, so the train is still in the land of prototypical (if that's how you are so inclined).

There are quite a few "shorty" standard gauge trains out there.  They are not easy to come by and some are quite rare.  Carlisle and Finch isn't standard gauge however it definitely could be considered a "shorty".  I'll post some more shorty's and movies shortly (pardon the pun).  I'll also discuss the history in a bit more detail and post quite a few more pics!  More soon -

Posted by Standard Gauge Blogger at 2:14 PM No comments:

I just liked this shot... 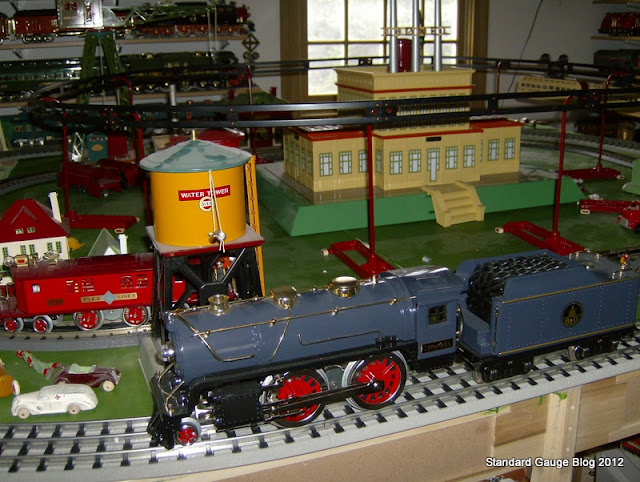 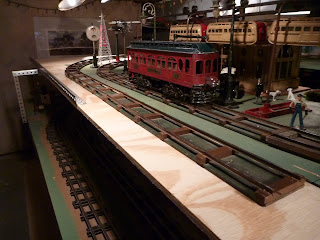 Stubby Trains and the collectors that love them.  More Soon!
Marc
Posted by Standard Gauge Blogger at 6:52 PM No comments:

Some SGMA Shots from Pittsburg

For those of you not technically inclined, I am posting some of the great shots from the SGMA event in Pittsburgh.  Ya gotta love these guys! 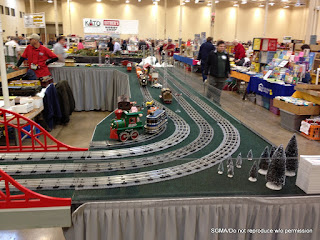 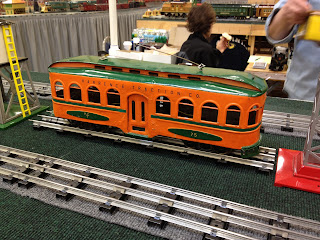 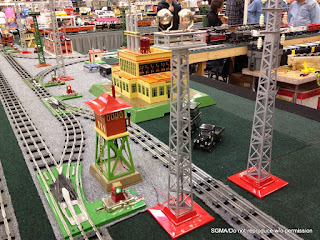 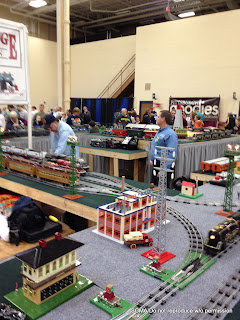 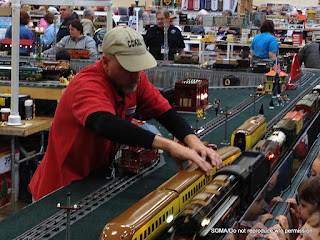 Posted by Standard Gauge Blogger at 6:50 PM No comments: 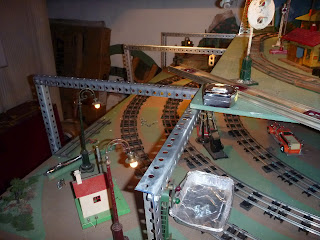 I want to add a loop of wide radius 2" gauge track, so it's time to expand the upper level on the layout. This is about it, though, I don't have anywhere else I can expand after this. It's nice for a city boy like me to live in a city twonhouse, but there are space limitations, and that's one of the tradeoffs you have to make if you want city living.
Posted by Jim Kelly-Evans at 7:45 AM 3 comments:

"Scarce tan Ives brass plate 3242 (1926) making a few test laps with a few freight cars. All original wiring, original armature, original wheels. This loco had been overpainted black on the outside and it took me four days to dig out the original tan paint!"