A Reminder of What Was

A few shots of Arno's collection from the TCA tour.  Definitely a collection compiled by a great man. 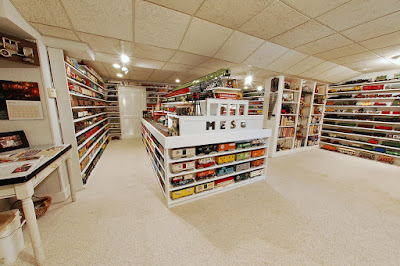 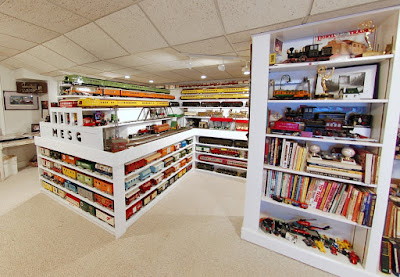 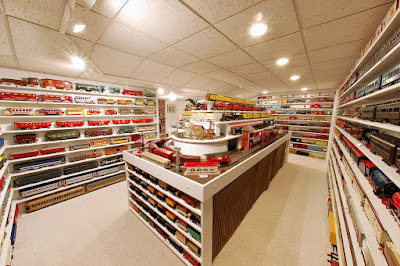 It is with sadness and very heavy heart that I report our very dear friend, Arno Baars has passed.  There is no way to fully articulate the kind of loss this is to his family, friends, the world.

I was lucky enough to call Arno a friend and an occasional co-conspirator in the toy train world.  His knowledge was vast, his ability to share and articulate was second to none and the humanity he gave to the simple hobby of toy trains will never be surpassed.

I tried my best to think of a way to describe him to future generations that might find this writing.  Why was he so important?  What made him different than the other thousands of hobbyists and collectors that have come and gone and are yet to be born?  What made him special to me?

Arno was so much more than a collector of toys and I was so glad to have known him.   I do know I will miss him and that my world is a little smaller and less without him.  I think a better definition (for him as a collector) would have been a Scholar of Modern Era Standard Gauge and the interpreter of the circumstances that produced both the creators of the toys and the items themselves.

Like the trains he loved, he had a colorful intellect that had a youthful sense of discovery and curiosity slightly beneath his surface.  He had a dry sense of humor that tended to sneak out unannounced.  Upon seeing him, he could have easily been mistaken for a farmhand.  However, assuming that his gentle brilliance was only because of a vocation or his own upbringing would be an injustice to someone that had such an abundance of both wit and wisdom.  Having both (wit and wisdom) put him in a special class of human being.

He was the type of man that could weigh his words carefully and still deliver a message anyone could learn from.  The importance of someone with his kind of capability could never be overstated.  He had the ability to frame an idea and surround it with a time and place.  No small feat however it was second nature to him.

I never saw him angry or confrontational.  When people were less than friendly, I saw him actually reflect in their behavior.  He didn't get angry so much as they tried to see where the negative action was coming from and try to plot a course around it.  Arno was very good at changing anger and using it as a tool to learn from and still see the color in both the people he interacted with and the toys he collected.

The loss for people that love the hobby of toy trains is profound.  What made Arrno special wasn't just that he was a collector of unique modern era standard gauge trains, he was a historian of the toys as well as the people that invented them.  He photographed much of my own collection.  I also know Jim Cohen spoke to him extensively about the many craftsmen he came into contact with.  Arno cataloged all of the interactions and carefully wrote down every bit of it on his trusty Macbook.

We have lost a librarian, a chronicler, a biographer, a lover of fine art and an artist himself.  He made an effort to reach out and not just acquire the trains, he also sought to acquire the history, the backstory and capture a little bit of the personalities behind them.   At one point I know he even planned on making a few trains himself and frequented York in search of information as well as sightings of rare and wonderful products.

In crafting his collection, he also told the story of art born out of necessity and how people could build something from nothing.  That's an important story as it is one of the things that is largely lost in our current society and remains a constant in human history; building things is part of being great.  And his fascination was not just with a toy or piece of metal, it was with the will to create it in the first place.  I know he was compiling a book on his beloved trains, I was never sure how far he managed to get on it.  I hope he managed to get much of it together as it would be a small part of Arno that could live on.  No book will ever replace him, however I do hope future generations know about him from his family and friends.  He was just so damn unique.

The first time he came to my house and we formally met, I instantly felt comfortable with him.  My kids also really took to him.  At the time, they were still very  young.   He was sensible and understated.  Yet his knowledge and experiences led me to very quickly respect and admire him.  Even having only known him a couple of hours, I bought him a steak dinner and traded stories with him until my kids were ready to fall asleep.  We spoke and exchanged emails many times since then.  My last conversation with him was a little bit about trains and a lot about music and our mutual favorite instruments (guitars).  He was a man that had a unique ear for sound and music and there are several Emmy's on his mantle to prove it.  I knew he was in a great deal of pain however I've rarely met a person with a toughness and spark such as Arno's.   This was a guy that wrung life out of every second he was on the planet.

The world is minus a wonderful story teller, artist and father.  I grieve for his family and close friends as they have lost someone of significant stature.  He was by no means an ordinary person.  His gentle soul and down-to-earth wisdom reminded me of a Will Rogers and a toughness that I'd wish more people possessed.

I know the trains that I once held in such high regard and fascination will have lost some of their luster as I have lost a friend that was part of them.  And yes, I'd trade all of them in an instant to have him back.

I quote from Abe Lincoln comes to mind for my friend: "And in the end, it's not the years in your life that count. It's the life in your years."  Truly his was a life very well lived. 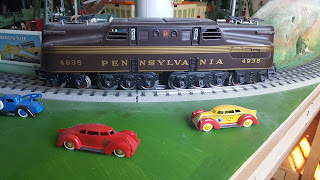 PS I know Arno passed away in September and I am publishing this on October 5th.  What took me so long to publish this?  Part of it was every time I started writing, I was overcome with sadness and some regret.  I wish I'd spent more time with Arno.  I revised this no less than 50 times and I feel like I still didn't get everything I wanted to say.  I guess there's only so much the written word can capture.  That's what took me so long.
PSS This is the last shot ever on my layout.  I have taken it down.  It was time.
Posted by Standard Gauge Blogger at 10:24 AM No comments: Links to this post

I know I haven't posted a heck of a lot lately but I just had to post this.  An artist took 85 year old photos and added animations and motion to them.  The effect is just fantastic, especially for the trains.  Check it out:

I'd recommend going "full screen" for this as the effect of the movement and the pictures really pops with a larger screen (not on a phone).

Happy 2016 everyone!  2015 was not a great year for trains (at least for me).  I've tried to sell off quite a bit of my collection, I think because I had way too much and I watched the show "hoarders" just once too often.  My friend in Switzerland Michel sent me some wonderful pics in 2015 and I have been sorely remiss posting them.... Here are a few.... 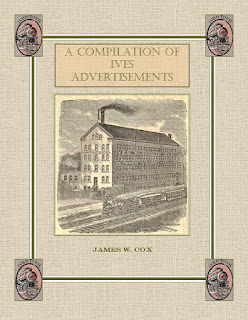 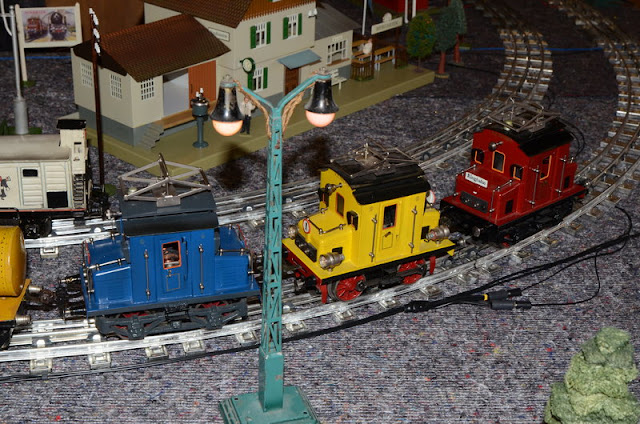 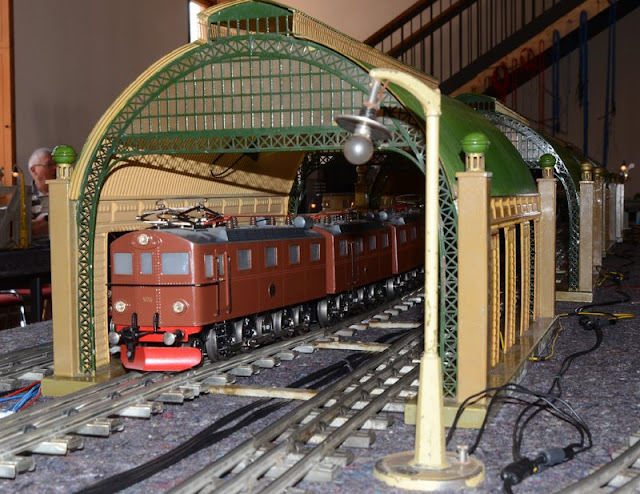 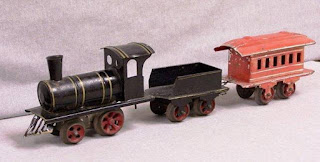 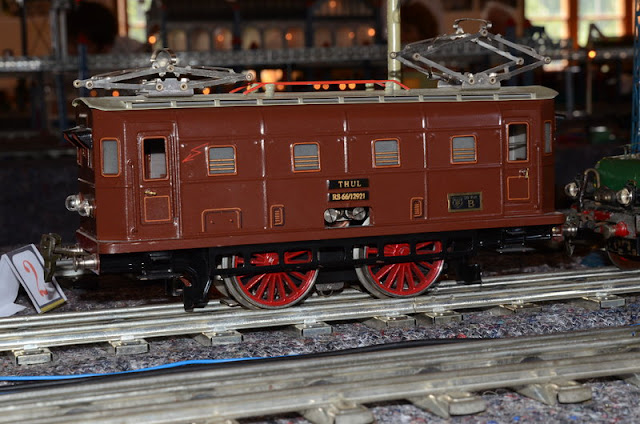 I hope 2016 is a better year for everyone, train-wise it definitely wasn't my best  year and I'm not sure the industry did well either.  I've heard the economy is getting better however I'm just not feeling it.   What's everyone else seeing that is new, offbeat or unusual?