You've noticed I put up a balasting survey. Part of the question comes as needing info for myself and part of it comes from wanting to find out how much high rail has seeped into our end of the hobby.

There's another survey from Vizu that I though I would try out that asks a whole bunch of random questions. This kind of irritated me because it asks too many personal questions (it wasn't positioned that way on the Vizu site) and I am having trouble backing out the HTML. Technically it's a hassle. I'll leave it up for a while, if anyone completely hates it let me know and I'll attempt to yank it. Otherwise you can answer or not, no confidential data will be gathered. I'll talk to my buddy Matt and figure out how to untangle it from the blog.... Should have learned my lesson from before about just keeping this to toy trains!

The third official outing of the Standard Gauge Module Association will take place this weekend at the Syracuse, NY Train Fair. Kirk Lindvig, Chris Bogus, Pat Rolland and myself are driving up to Syracuse this morning in Kirk's Suburban pulling a huge trailer full of trains, modules, and accessories. This should be a ton of work, er, I mean fun! In Syracuse we'll meet up with fellow SGMA members from NY and join our modules with theirs to form a historic first ever combined SGMA chapter layout. If I can get online I'll post a picture or two.

Jim
Posted by Jim Kelly-Evans at 5:33 AM No comments: Links to this post 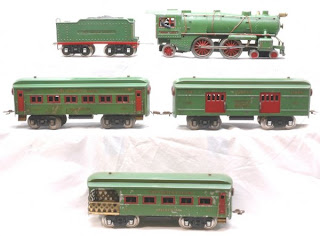 Wow! The next auction at Stout is up and on EBAY. What a selection of goodies in Standard gauge! This is Dorfan's "Palmetto Limited," featuring the IVES 1134 casting loco and tender in green. With the economy in distress, it will be interesting to see the prices realized on some of these high end rarities.

PS: Is that "Dorfan Dan" in the loco cab?
Posted by Jim Kelly-Evans at 8:35 AM No comments: Links to this post

The 1929 American Flyer catalog cut showing the Flying Colonel set. Click on it to blow it up and read the text. $62.50 must have been about two or three weeks pay for the average American worker in 1929!

Jim
Posted by Jim Kelly-Evans at 10:38 AM No comments: Links to this post

A friend asked to see photos of my American Flyer Flying Colonel set that I posted about yesterday, so here they are. You can click on the photos to enlarge them as always. I believe that the Flying Colonel was introduced in 1928 but catalogued only in 1929. It is a scarce set that always brings a premium, probably because it was not produced in the same numbers as other AF Wide gauge sets. The photos don't really do it justice because they don't show the beauty of the deep blue colors that this set is painted. 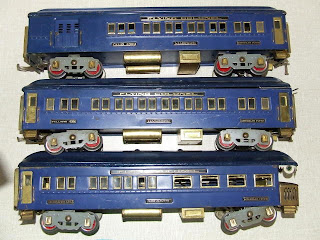 I used to think that the Rolls Royce Blue 1928 President's Special set was the prettiest AF Wide gauge set. But now I like this handsome Flying Colonel set most of all. It is noteworthy that MTH reproduced this set. 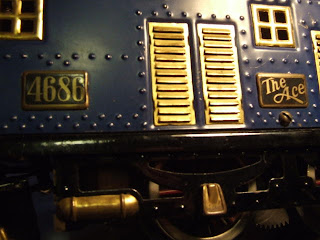 I've wanted the great AF Standard gauge Flying Colonel set for years. Finally, I have it, but look at the blown wheels on the pony trucks of the locomotive! There has been a lot of discussion on the STANDG list about the lack of availability of AF Standard gauge replacement wheels. I did buy eight pony wheels from George Tebolt at York, but that was all he had. Hopefully, MEW will be in a position to provide these AF replacement wheels before much longer. I can't wait to get this great Flying Colonel set running on my layout! 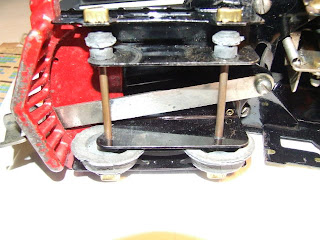 Posted by Jim Kelly-Evans at 12:11 PM No comments: Links to this post

Last May I wrote about the resurrection of a Carlisle and Finch #4 paper label set:

They look like Finch's small 13 series passengers cars and have exactly the same dimensions, but the window shapes were different and the cars are made of steel instead of brass. After de-rusting, the original scribe marks emerged around the windows and doors which showed that they were hand cut, suggesting that the cars were hand made. Finch would have made up a punch with jig to make the windows 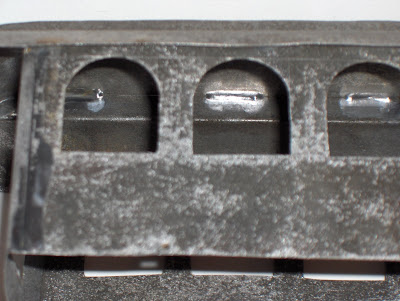 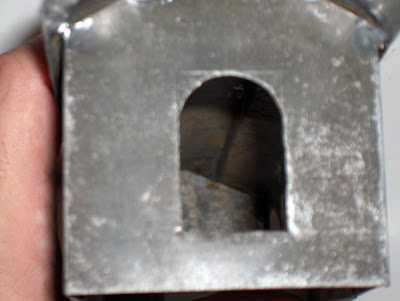 After repainting them to match the original design, I made paper labels in two styles. One had black lining and lettering on a yellow background like original Finch labels and the other had yellow lining and lettering on a black background which matches the style shown in Finch's black and white catalogs. The illustrator probably did this to make the labels stand out more clearly in the catalogs, but I thought I'd try it out to see what it looked like: 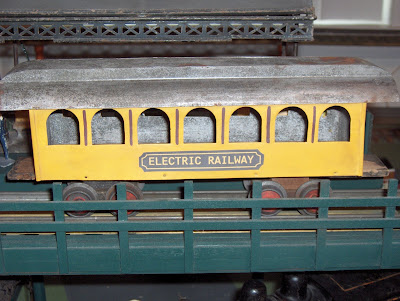 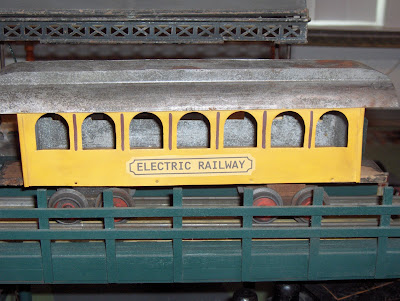 I asked 7 people who's opinion I respect which way to go with the labels: 4 were for black, 3 for yellow. I excercised veto power and went with yellow because the black looked a bit overpowering. The labels were made up to closely match Finch's font style and the cars were weathered to give them some patina. The wheels were simply derusted and the original paint, or what was left of it, was kept. 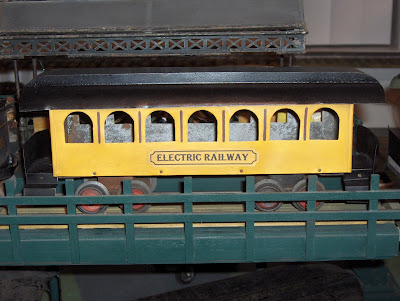 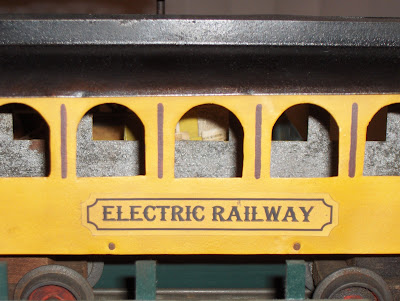 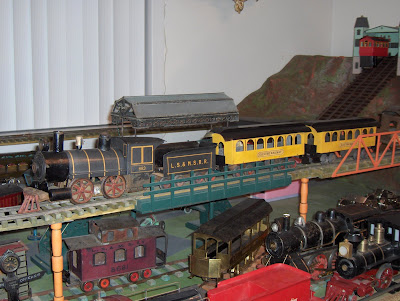 I think the cars were made about the same time as the engine. Finch's catalogs encouraged scratch building and sold parts for that purpose. It wouldn't be surprising that someone simply bought the wheels and copied the 13 series cars to save some money or just because they wanted to build some cars.

So How Was York? 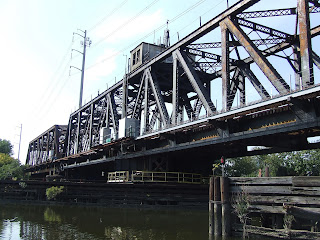 I have a couple of dealer friends who are very pleased with their sales at York last week. It seems like people were buying trains in spite of the economic problems we have. As I walked around the aisles I thought to myself that, wow, there are a lot of trains for sale! But, crowds in the halls on Friday were large. I had a nice time and enjoyed talking to a number of friends and meeting people for the first time, like Mark, Don and Naomi of New England Toy Train Exchange. I picked up some parts and paint, the new Lionel Fun Factory book, and a scarce C&F car. It was a good York for me.

Recently Dan and I took a river boat cruise on the Schuylkill River in Philadelphia, a river that is noteworthy for a number of railroad bridge crossings including this massive swing bridge. The center section reminds me of many of the toy train bridges that have been made over the years, including the great prewar AF wooden Wide gauge lighted span that is such an impressive accessory.

Jim
Posted by Jim Kelly-Evans at 8:06 AM No comments: Links to this post

Email ThisBlogThis!Share to TwitterShare to FacebookShare to Pinterest
Labels: York 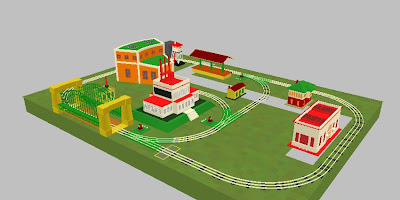 So, here's my first take at a new layout. After building a whole bunch of HO and N gauge (when I was a kid and teenager), I am giving standard gauge a shot. Actually, I have an O gauge prewar layout in my closet upstairs.

I need some feedback on my layout. This software (use the link here) is amazing.

The only thing I am having a little trouble with (and it is more me than the software) is figuring out how to build tunnels. Right next to that big 115 station I am going to plop down a HUGE tunnel. I just can't figure out how to get the darn thing on the layout. I will figure it out and you will see a tunnel!

The other helpful thing is getting an idea of perspective with my accessories. That is hugely helpful with this softare. Two things the software seems to be missing: Leland Detroit Monorails and an easy way to do elevated train lines like 2 7/8. If anyone knows a way.... Please let me know!

Have fun at York!

Inside The Lionel Fun Factory 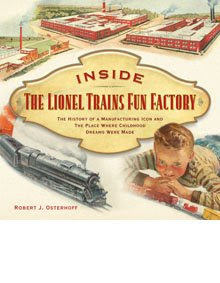 I'm working my way through this book now and I gotta tell ya, Jim Bunte's review in TCM was dead on. This book is absolutely fantastic.

The writing is eloquent and the detail is wonderful. I am in New York City, New Jersey and Connecticut constantly, just seeing the places that are discussed or mentioned in the book makes history really jump off the page.

Really this book is just one of the best ever done. Go out to Amazon or Project Roar and pick it up. We have to support the author and encourage him to do more work like this. 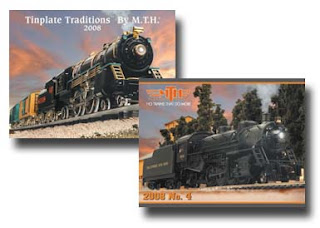 The link is above. It's a great catalog, no doubt. MTH should be commended, no company has ever offered the depth and breadth of product that they offer in this tinplate catalog. Use the link at the top and download the PDF. This catalog is as good as it gets!
Marc

I just read Jim Bunte's terrific article on the new Lionel Factory book by Bob Osterhoff and I navigated over to this website. Pretty interesting stuff.

I ran out to Amazon and bought the book, go out and check the TCM website for the article/latest addition. With the economy tanking, about all I can afford is a new book!!