That's what I'm talking about!

Well MTH just moved into the "most impressive innovator" in toy train history books.  Yes, I know they've done a tremendous amount for the hobby both in O gauge, Tinplate and so on.  Yes, I know they have a fantastic control system called DCS.

I was a little disheartened by the Ives Catalog.  I guess I really needed to see it for what it is: a tinplate flavor of the "Ready to Run" offering.  That makes it excellent and not a dud by any stretch.

However the main event is the Tinplate Catalog which usually debuts around the April York time frame.  This is really something I do look forward to, largely because outside of some unusual finds in prewar product, Tinplate really doesn't change radically from year to year (at least as a product).  Layouts can change daily or even hourly!

This new MTH catalog hit me between the eyes.  My tinplate expenditures have really fallen off, largely because I've had just about one of every key or important set there is.  And because spending infinite amounts of cash on trains really isn't optional for me.  This catalog was a very pleasant surprise for a couple of reasons.  Most obvious is the picture at the top.  This is new product that should have been produced many moons ago.  Nonetheless, it is still absolutely brilliant and near art in both concept and execution.  I for one will be buying both sets, guaranteed.

Subways do lend themselves beautifully to tinplate, largely because of the time they've been around, their historical documentation and ready availability of prototypes (if you've never been to the New York Transit Museum in Brooklyn I highly recommend it).  If you've ever been on Boston's subway it is the same deal, both modern and classic hardware running through dimly lit New England tunnels.  It's a really fun system that just plain works.

The catalog has some other outstanding features.  I really like the State Brown Brute.  The color brown usually doesn't evoke thoughts of a regal means of transport however the State Brown set is just gorgeous.  And I do very much like the New Haven set as well.  I am a huge fan of New Haven and the sets I actively seek out.

So bravo MTH!  Even the retooled stuff like the Boys and Girls sets manage to really get interesting.  The colors and mixtures of cars are fun to look at and I'd wager to say they'll be cherished many years after they are introduced.   The newly offered 2600 series cars are also really well done and I do think I'll be ordering a few as well.  The 4-4-0 sets are a very welcome addition as they are the first sets in standard gauge to really jump back to the Civil War era (and do a great job of it).    I hope this kind of catalog is the shape of things to come and I do think MTH will be rewarded with both sales and customer loyalty.

I'd love to hear your thoughts!

Marc
Posted by Standard Gauge Blogger at 9:44 AM 2 comments:

Posted by Jim Kelly-Evans at 11:01 AM No comments:

I've had some time to ponder this catalog and really look it over.  It's all stuff MTH has done before.  And it is two pages.

So now I have a couple of questions.  Is this really a product offering or just a pamphlet to see if any customers will bite on twice redone Tinplate sets?  I'm really hoping this isn't the wave of the future for MTH.  I'm hoping this isn't the end of a brilliant tradition started with tinplate catalogs and wonderful offerings dating back to when Mike started with Williams and culminating with his absolutely brilliant partnership with Lionel.

There is so much more room for innovative tinplate in the marketplace.  There is so much wonderful stuff out there that has never been adequately produced or reproduced and I hope MTH isn't throwing in the towel.  This shouldn't be a discussion just about standard gauge, it should also be about O gauge as well.

Fact is, this isn't even close to what Ives produced that was "uncataloged" either before Lionel snapped them up or after.  If MTH really had the guts they'd produce a super-rare item like the Ives Treasure Chest.  Or even some of Ives' One Gauge in Standard Gauge format.

Marc
Posted by Standard Gauge Blogger at 8:33 AM No comments: 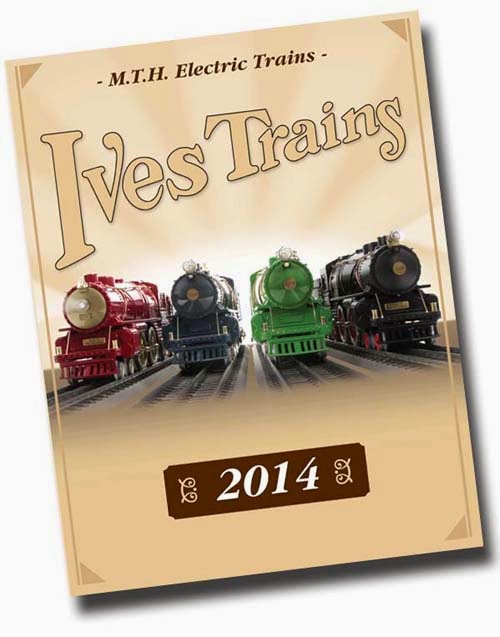 So, I'm hoping this isn't the April York Tinplate catalog.  While not a bad offering, it isn't exactly exciting either.  All rehashed stuff from prior catalogs....

Marc
Posted by Standard Gauge Blogger at 8:57 PM No comments: