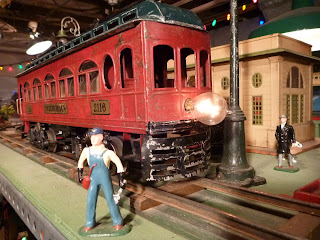 "Everything I Have Runs" is my motto. Luckily this treasure fresh out of an attic is in great operating condition. There's a video on my (skeptic49) YouTube channel.
Posted by Jim Kelly-Evans at 8:12 AM No comments: Links to this post

I just love the lights in Grand Central. They don't make them like this anymore. Does it get better than this? Merry Christmas everyone!

Marc
PS Click on the pic to blow this up.  The ceiling isn't too shabby either! 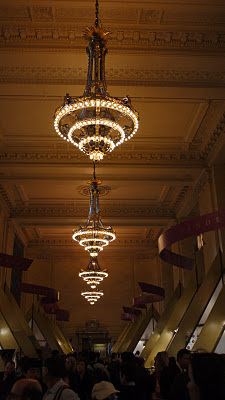 If you happen to be in Lower Manhattan this season...

You have to check out this shoe place.  Yes, I'm not insane.  Really.  I'm not.  Frye's Shoes is there flagship store at 113 Spring Street in NYC.  Don't go for the shoes unless you have a wife or girlfriend and your credit card has a high limit and is paid off.  They have nice shoes.  This is a blog about trains and tinplate.  And it's what they have in the window that is something special.  They have robots and tons of cool tin in the window.  And the window dressing moves.  Really, this is one hell of a cool set of windows. 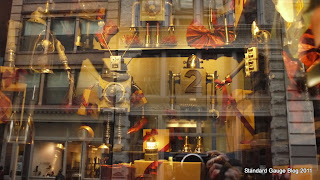 See that big clockwork thingy?  Well it turns and does stuff and it is absolutely mesmerizing.  The window display is absolutely show stopping.  It is as good as anything I've ever seen in any Macys or Bloomingdales or Harrods or whatever. 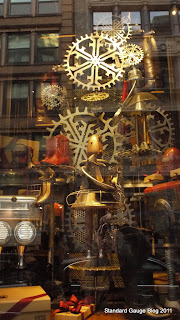 Merry Christmas All!  Welcome to prime time for toy trains.  I was in Grand Central last week with my Panasonic Micro 4/3rds camera.  And well, go figure, there were a few toy trains there.  Grand Central at Christmas is always a spectacle.  There are quite a few special stations in the United States and Grand Central is the king to rule them all.  I really don't even think the models of it do the grandeur and boldness of the structure justice.  It is one of those places that has to be taken in by being there.  And the wonder of the place doesn't get old or pass with age.  It gets better.

I snapped a few shots in the Grand Central Transit Museum.  The MTH layout is there every year along with some key parts and pieces of standard gauge collections.  The layout is excellent O gauge, especially for the really small amount of space they have.  The kids in Grand Central were absolutely going nuts over the trains and there were plenty of outstanding quality sets that could be purchased right on the spot and reasonable prices.  It really is a warm and great atmosphere to see these toys.  Maybe the SGMA can cut a deal with Grand Central to really show them so serious toy trains! 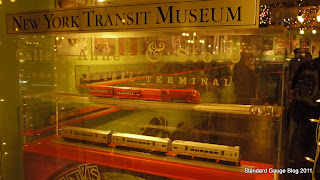 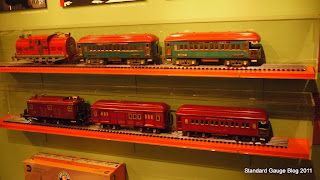 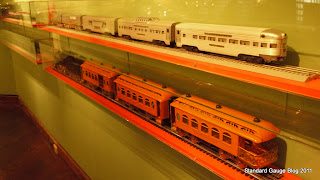 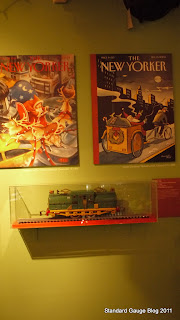 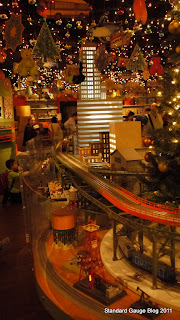 This is not mine...but reflects a lot of effort on the part of the hobbyist.
Posted by Jim Kelly-Evans at 9:45 AM 2 comments: Links to this post

Posted by Jim Kelly-Evans at 8:14 AM No comments: Links to this post

Ok, stop watching that stupid Orange on Youtube and watch a neat tinplate slideshow instead:

If you have Apple TV on your television these are really neat to watch on a larger screen.  Somehow laptop screens and tinplate just don't work.

I am in the early stages of a layout rework.  I am bored to tears of a straight oval.  I'm afraid I'm one of those people that needs switches (turn outs).  I have plenty of MTH switches, I just need to mate them to the new MTH track.  I do love this track, it is a bit more robust than tubular track.  Some new tinplate as well.  I'll post some pics later on this week.

Any holiday layout specials?  I just bought some new McComas videos and they are stellar!  Anyone have any favorites? 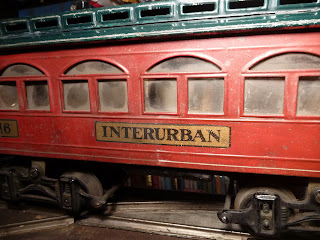 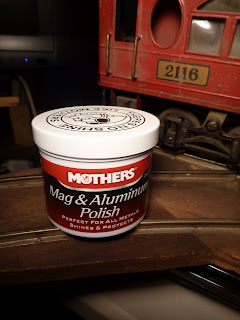 A friend suggested "Mothers" metal polish to use on dirty painted tinplate. I have to say it really does a nice job as you may be able to see in the photo of this Voltamp piece I just bought. It just came out of an attic in upstate PA and it is REALLY dirty! Note how shiny it made the roof.
Posted by Jim Kelly-Evans at 12:34 PM No comments: Links to this post

You must spend some time checking out the SGMA's amazing Pittsburgh event.  It doesn't get better than this. And with the visit to John DiSantis, it just puts it over the edge.

With huge thanks to Kirk and team, this event just has to be seen!

Live steam doesn't always have to be steam. Hot air engines work on simple principles of expansion and contraction of air, and have been used for over a century for yeoman service. Check out this link to see Jay Leno's hot air engine pumping water around a bucket:
http://www.jaylenosgarage.com/video/ericsson-hot-air-pumping-engine/1241133/
Despite several science degrees and a few thermodynamics classes, I still really don't understand how these things work in practice; but work they do. The advantages of a hot air engine is durability, simplicity and longevity: they will run until the fire runs out. The disadvantage is that they are very weak, which is why you never see them powering a locomotive. Except here: 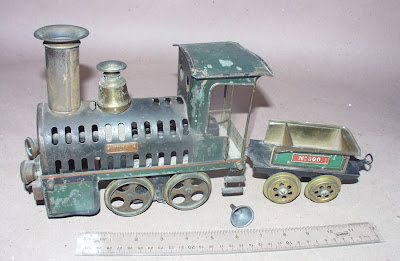 Ernst Plank was the only company that I know of eccentric enough to sell hot air trains. They only made two types; this locomotive and a tram based on the same chassis.Because of the weakness of hot air propulsion, they needed large engines. 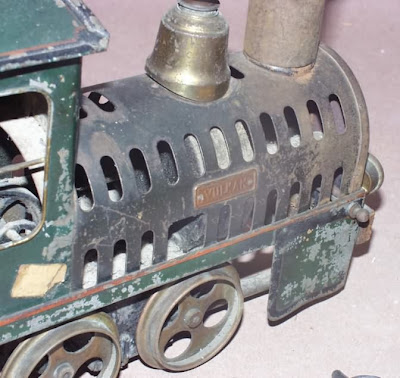 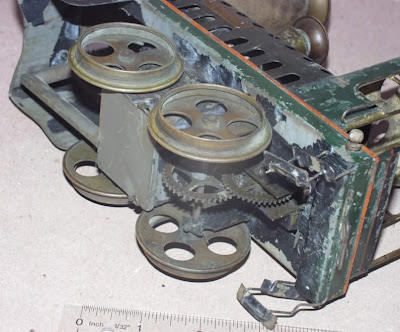 Therefore these trains are Gauge 3 (67 mm, or 2.5", or Gauge 2.5 in some catalogs which reserve "Gauge 3" for 75 mm gauge). Although the locomotive pulls a gauge 3 train, due to the poor pulling power Plank actually used a gauge 1 tender and gauge 1 cars made out of the thinnest tinplate imaginable. The tender and cars look horribly disproportionate with the loco in pictures, and in fact the engine doesn't look like much in pictures either, but in person it has presence. Unfortunately, my engine is frozen up. It looks like the copper pistons have welded themselves to the tinplate sleeves through galvanic corrosion, so I can't really confirm or deny that these have decent pulling power. A word of warning: the tram has been faked; so much so that there probably are more fake trams out there than real ones. Allen Levy wrote about a pair of them way back in the mid seventies in "Century of Model Trains". Its one of the highest items on my want list to get, but I am very nervous about buying one. The locomotive's value is probably as much for pilfering the chassis to fake a tram than in the loco itself.
Posted by alex at 4:15 PM No comments: Links to this post