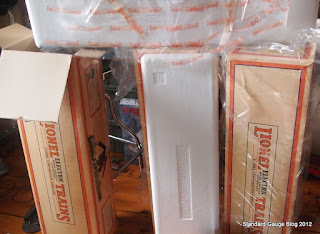 Hello Standard Gauge Friends!  Well, I just got my hands on a few of the new Chromate cars for the Brute.  I must say, these a ridiculously huge.  I mean Buddy L large!  They are well done and I think my "out of box" experience is quite a bit better than some of the initial findings I've read about on the Tinplate Forums.

These will overwhelm almost any layout.  You need an SGMA size layout to actually run these things.  I just have the 3 car set, I didn't buy any extra cars.  Really though, they are gorgeous and well done.  I have to say that they would have been overwhelming for any early 20th Century era home, however they are destined to become classics in the 21st Century.  They are highly unusual and I haven't seen anything quite like them.

I'll try and roll some film of these things running.  I may have to clear out (as in sell) some of my other stuff to make room for these beasts.  Each one weighs what a normal high end O gauge loco (or 2 or 3) weighs.  And they are about the size of an average 4 year old.

Marc
Posted by Standard Gauge Blogger at 1:46 PM No comments: 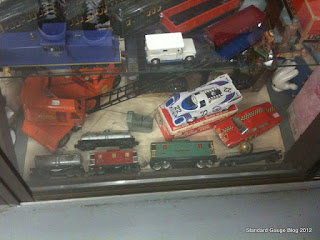 There's this monster antique store in Stratford,CT my son and I go to.  It's on Honeyspot Road (I just love the road name)....

I just saw a few tinplate trains there and I had to get a shot.  This place is great, they usually have some trains somewhere in the place (it's just a huge steel warehouse w/antiques).  My son goes hunting for pocket knives in the place and once in a while he turns up a gem.

I like seeing original Lionel stuff so it's kind of fun.  If you are in the neighborhood it is right off of I-95.

Marc
Posted by Standard Gauge Blogger at 12:13 PM No comments: