More On The Rotting NYC Electrics

I've been trying to follow the saga of the decaying S-1 and T3-A former New York Central locomotives that Marc has posted about.

A little background as this relates to toy trains: Lionel, as we all know, based much of their prewar toy train electric locomotive production on the S Class electric locomotives that the New York Central used to pull trains in and out of Grand Central Station starting ca. 1906. In Standard gauge they made the 42, 402, and 408E, among others. Needing to be competative in the 20s, American Flyer used a different, more modern prototype from the same railroad, the T series boxcab, known as "T-Motors," which did the same duty during the mid-1920s that had previously been done by the S class electrics. This is the locomotive that served most famously as the inspiration for the 1928-on 4689 Rolls Royce Blue President's Special loco, the 1927 light blue enamelled 4687 President's Special loco, the ultra rare chrome "Mayflower" loco, and the beautiful dark blue 1929 Flying Colonel ("The Ace") locomotive, among others. So the T series New York Central T-Motor boxcabs played an importand role as prototypes in prewar electric train production, along with the S series electric boxcabs.

From what I've been able to learn via online research, there are SEVERAL surviving S series boxcabs in various locations throughout the country. However, there appears to be only ONE surviving T-Motor, the T3-A (former NYC #278), the one that sits decaying near Albany. I don't know the ownership status, but here's a website that has a lot of photos and updated information as of about a year ago: S. Berliner. III's site

Like Marc, I am worried about the fate of these historic locomotives, especially the T3-A. Maybe the tinplate community could become involved and have a role to play in helping to insure their survival.

Something to ponder: there is not ONE surviving New York Central Hudson. Imagine that.

Jim
Posted by Jim Kelly-Evans at 9:20 AM No comments: Links to this post

Benjamin just posted a great Youtube video of his C&F Trolley making the paces. He is also working on a steam driven power generator to really run his trains! Check out the video plus others....

And a Toonerville for good measure:

Here's the original pic of the S-1 that is now rotting in upstate NY. Look familiar? 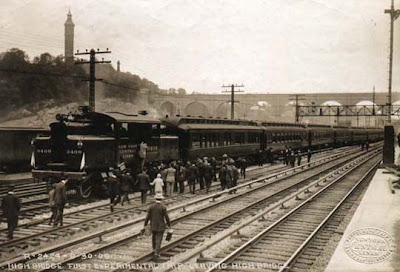 PS Here's the other amazing gem left to rot as well. Please, someone that is responsible for these please email so we can start an effort to preserve them. 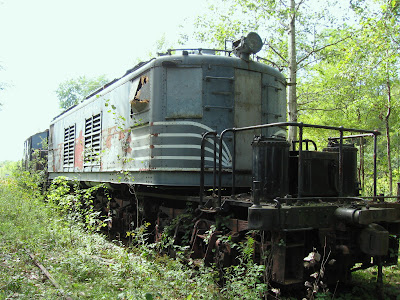 For those of you not familiar with Linked In, it is an online service that is free of charge. It's for grown ups, it is designed mostly for business people to stay in touch and look at resumes and make recommendations.

I have found it is a great way of staying in touch with people without hammering them with emails and the like. Perhaps it is time we train folks use Linked In? Maybe start a TCA Group?
I'd like to see us start to leverage our power and message out there a bit more than we do. Or are we just content to watch our trains go around our layouts and hope that someone doesn't bid up that favorite loco on eBay?
I use this service often. I have kept in touch with folks I haven't seen or worked with in 15 years. So even more. I know the TCA publishes a big old book every year with names and addresses in it but I have train friends that aren't in the TCA or spend most of their time with TTOS. This could bridge all those gaps. Go out and join. It costs nothing and could be a tremendous tool.
For crying out loud, go out and join it and give it a try. It's a passive service that essentially requires diddly for effort. Stop being a garden slug!

Email ThisBlogThis!Share to TwitterShare to FacebookShare to Pinterest
Labels: Linked In, TCA

Besides depressing the heck out of me with the S-1 (see previous post) Dave also sent me some pics of his scratch built train shed. These helped me perk up a bit. Dave is a great scratch builder and these shots prove it. This is some die-hard standard gauging....
The Train shed is based on a New York Central Elevated. Dave is going to "deck" it with real oak wood strips and put it next to an old Ives 116 Station. I'd say the effort was definitely worth it. Check out the pics.
Marc
PS Dave, I don't know which bridge that is in the background but could you send us some shots of that as well? That is really something as well! 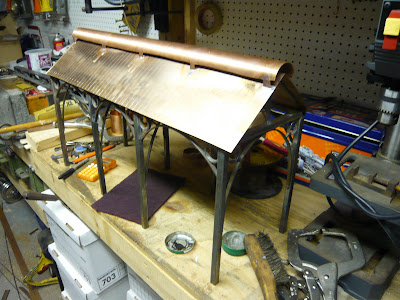 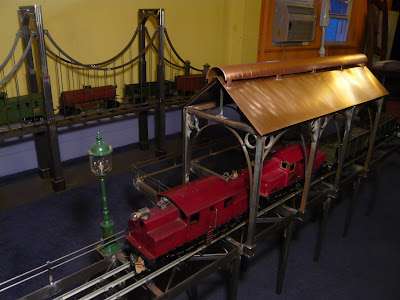 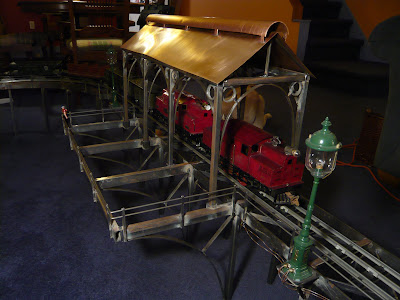 Do Something, we need to take action

This has everything to do with standard gauge and the real history of our hobby.  Some very key pieces of our most important railway history has been left on a rail to rot in upstate NY.    This is bad, disgusting and needs to be fixed.
Do you like 402's, 408e's, 1912's, 42'2, 54's or how about a Rare Ives Black Rubber Stamped 3243 found in weeds! Along with AF 4687.   Well, the prototype for all of these and quite a few other classic standard gauge and o gauge trains was the New York S-1.
You ready to puke?  The reddish looking loco in the picture is the original New York Central S1 Motor #100.   That isn't a typo.  It's the original loco that started our hobby off.  Built in 1904 by GE/Alco.  I actually saw one of these (not this one) in Grand Central many years ago and it was really amazing.  The other loco is a New York Central T3a Motor #278.   Probably one of a kind at this point.  They are rotting outside of Albany, NY right now and have been there for at least 20 years.
My friend Dave pointed this out to me and I am kicking myself silly.  I saw this S-1 years ago in NY State rotting away and thought that surely it must be slated for restoration.
Well, follow the link above and you will catch some of the sad story of how this absolutely critical part of our railroading history has been left to rot in the forest in the ass end of Upstate NY.
To quote Indiana Jones "These belong in a museum".  Supposedly these folks own these locos and a few more left to rot (including a U25B): Mohawk & Hudson chapter NRHS.   Does anyone know these folks?  Why hasn't this been fixed?  Does anyone want to jump in my SUV and haul up to Albany with a digital camera and some mosquito repellant to get some pictures?
Can't we get these to a reputable train museum for storage and restoration?  I sure as hell am going to make some phone calls, donate some money and bring this up at a few train meetings.  If I had a huge helicopter or some heavy machinery these would be gone faster than a jack rabbit on a Nascar track.
This is definitely NOT a fitting end to a major piece of railroad history like this.  It belongs at the TCA Museum (at the very least) or at a reputable train museum anywhere in the world.   This just isn't right.
Marc 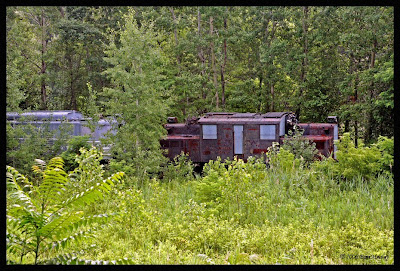 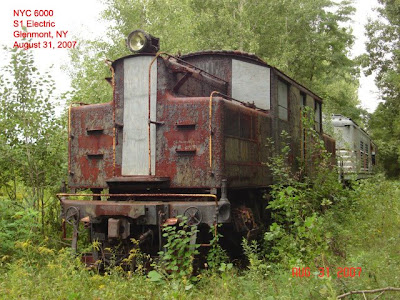 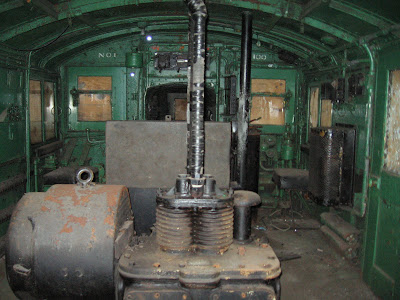 Check this out!  For those of you that have been waiting for a lift bridge for standard gauge...  Go out and check out 100 Year Bridge Co's website.  They make great products and the prices are 100% reasonable.   Check out that new monster bridge at the bottom.  Finally a bridge with a TON of space to play with.  I think I could even run some of those standard gauge race cars across that sucker!
Marc 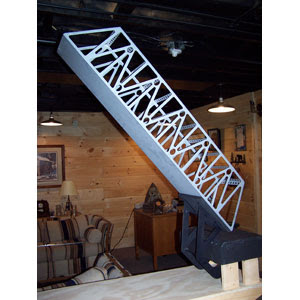 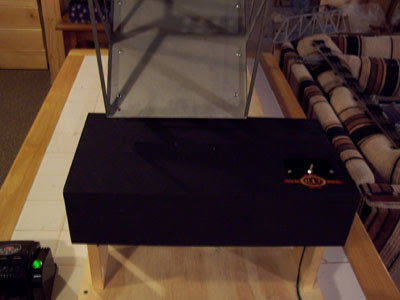 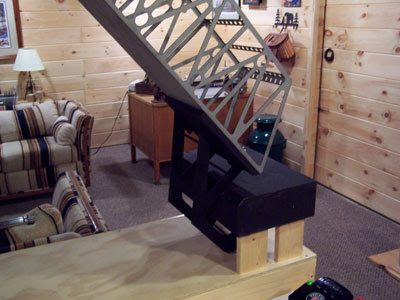 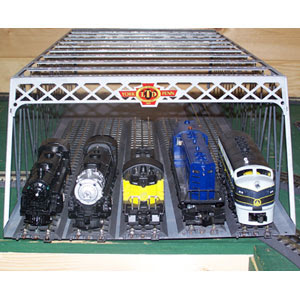 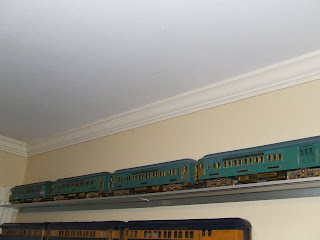 All because his Aunt Kate gave him a little black wind-up steam engine 79 years ago, which he held onto ever since. It will go into his casket with him, at Mr. Hare's request.

I didn't know Frank Hare, but I did speak to him a couple of times, once to order some of the lovely American Flyer reproduction prewar catalogs that he published, and on another occasion to ask permission to use a photo from one of his books, which he gladly gave me. He struck me as being a fine gentleman and a real credit to our hobby. I regret that I didn't interview him for Tinplate Times.

Frank, have fun playing with that AF President's Special out there in the cosmos.

Posted by Jim Kelly-Evans at 5:56 AM No comments: Links to this post