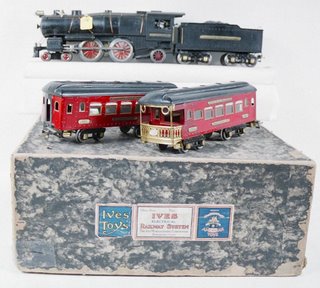 Use the link on the right and check out the upcoming auctions. If you are shopping for some nice Lionel gear, you should take a gander at some of these auctions. 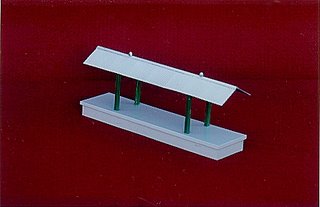 A cute little station from Steeltoys. All of Mr. Fusco's items are very reasonably priced as well.

PSS Ok, I've seen a ton of posts and discussion on Standard Gauge Modules. I'd like to get some pictures from Kirk than I will post his letter as well as some supporting documentation. The modules are a good idea. They've never been done before and standard gauge needs strong benchwork support (mostly to support all that metal) and also for convenience. The point is that the discussion hasn't gone un-noticed. I have been waiting for it to work itself out and start to come to some conclusions before posting on it.

So, look for the info in upcoming posts!

Click on the link above. I know it doesn't have much to do with Standard Gauge but you when you see these models, you'll definitely want to check them out.

I'd like to go see this park but it is two hours outside of Tokyo. As if I don't do enough traveling allready! 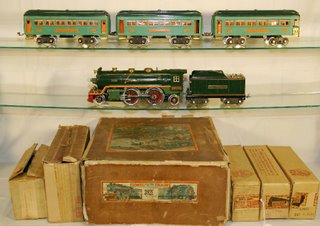 The April 8 auction is up on the web. Mark Tobias told me about this set a few weeks ago. I heard about it but dismissed it as yet another Lionel set I had seen before.

This is one gorgeous set. I have never put these colors together before. This is really a heck of a nice set. I hope MTH catches the bug and puts something together like this.

I know everyone is waiting for me to start posting again. I've been completely inundated by work lately. I have also been cleaning out the old train room and figuring out what computer junk I need versus what can make room for trains.

Funny, when I was younger I felt very nostalgic and collected quite a few computers and items from my old jobs. I can't wait to get this stuff out of my house! I know that hindsight is 20-20 and that 50 years from now, I might regret it but somehow I doubt it. I have about 20 old computers sitting in my closet and they just aren't that interesting.

Yet again, trains have been interesting to me since I was 4 (36 plus years ago). Computers; I am over them. 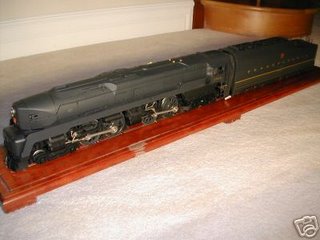 So I'm watching the new seaon of the Sopranos and I see this T-1 on eBay. I bid on it a little but it is up to $5k. A little too rich for my blood. I am curious about it, that's all.

Has anyone actually seen these things run? Maybe it is just me but even when I see these expensive models in standard gauge, all I can think of is the dumb pissing match that scale o-gauge has devolved into.

I have seen a couple really prototypical standard gauge products and I have several in o-gauge. Still, when I see this product I think of the masses of product Lionel and MTH, K-Line and the usual littany of O-Gauge scale manufacturers put out.

Someone tell me I'm wrong, they've seen these things run and they are like watching masterpieces/works of art chugging around a layout. For me, all I think of is yet another article or bit of recent literature waxing on about how amazing a scene looks from a layout and how the builder used actual dirt in his highrail layout to get a "real world" effect. Why am I not impressed?

Maybe because if I wanted realism I'd get an HO/N/Z layout from Marklin at a fraction of the price standard gauge costs that fits an entire West German City into my home office. Or I'd grab some G-Gauge and plow down my backyard and convert it to a massive freight empire.

If I'm spending $6.5k for anything, it better be something kissed by Joshua Lionel Cohen himself (yes, I know he changed his name to Cowen but I prefer to think of him by his real name). Don't sign me up at the scale train warrior clinic anytime soon. 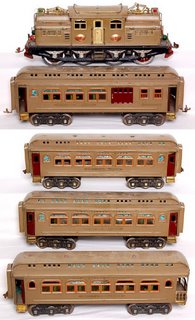 Looks like the March Stout auction is up. It has some nice standard gauge (especially freights). The Ralston Auction has also been up for a few weeks as well (happening March 4).

The interesting thing is that while both are fairly nice, they also don't have too much that is remarkable. The last Stout Auction had a really nice Blue Comet set.

Has anyone seen any standard gauge out there lately that was really unusual?

Also, I want to run a little poll: how many folks out there have 2 7/8 gear in their collection? I just saw a Converse Trolley out on eBay for over $23k (asking price) and I was wondering how many folks were actually interested in this?

So the question is: How many of you have a 2 7/8 gauge circle of track (either from JL Cowen or MTH) and a DC transformer?