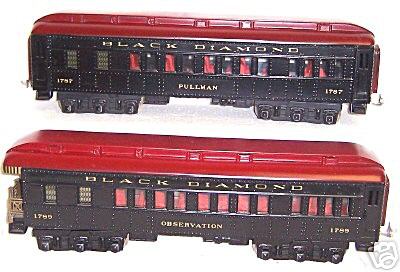 Ok, I know you are wondering why I haven't been posting lately. Top of the list is that it has been so dang hard to get into the Blogger dashboard to type anything! I don't know what's going on, I think as the numbers of bloggers exponentially increase, so to does the traffic to the authored blogs/websites. Ergo, authoring these things slowwwwssss down dramatically.

The above pic/auction caught my eye on eBay. I am kind of a JAD/Daniels nut. I like their stuff. It's some nice standard gauge. I have never seen the above heavyweights as Black Diamond cars. I have the same flavor as the above in the set Daniels sold with the GG1.

Eventhough I am heavily space constrained, I'd still like to get my hands on more Daniels. It takes some tweaking to get the stuff to run right but when it does, it really is something. I have one standard gauge GG1 from him that really goes fast around wide curves and is just a joy to watch. I recently picked up a few Williams O gauge pieces (one is a GG1) and it runs the same way, smooth as glass.

I have a Daniels Standard Gauge City of Denver and man, that thing has got to be one of the crankiest trains I own. It makes my prewar Lionel stuff look like an oily can of WD40. It takes a ton of work to get it to work right. It is mighty nice when it does work though. I seem to remember buying it from John Daniels himself.

As I recall (and this has got to be around 8 years ago or so), he said that he had 3 or 4 sets in his attic he was looking to get rid of. If I remember correctly (it was almost a decade ago), he was an extremely nice person. Very interesting to speak with. I could kick myself, I just didn't have the bucks to buy anymore. A guy who was supposed to be a friend of mine bought two Hiawatha sets. Wierd thing about greed though, it really impedes any kind of friendship. Later on, when I asked if I could buy one of his Hiawatha sets, he wanted to charge me double for what he bought it for. I hope he enjoys both of his sets!

I have heard (matter of fact) that Daniels made a standard gauge set with a GG1 in Tuscan and matching cars. Supposedly the set kind of looked like Congressional Set. If anyone has one of those floating around out there, I'd sure love to see a pic of that!

Back to the above set out on eBay.... I'd really like to know what engine was paired up with those cars. Supposedly the cars came from an estate auction. They look like they've seen some milage although that just might be the photography. If anyone has seen a Daniels Black Diamond Engine, let me know. 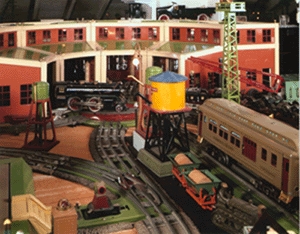 Couple of things about a great man; there's a nice article in CTT coming up from Roger Carp. Attached (above) is the URL to see the preliminary web flavor.

Also, here's the URL for the actual museum itself. It's good to see that they (the people that inherited the collection) didn't eBay or auction it off. This is one of those parts and pieces of history where how the collection was built is as intersting as the collection itself.

M
Posted by Standard Gauge Blogger at 7:41 PM No comments:

What's next for MTH? 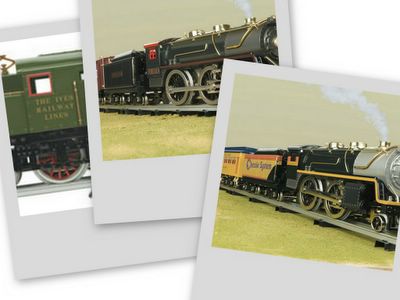 So York is on the way and MTH is rolling out their big catalog. Any ideas on the standard gauge they might put in the catalog?

Ya know, it's kind of funny, one half of me is hoping they have something that I'd really like; a 390E in Blue Comet Colors and a nice green and orange stripe 390E would be great. I know they have the capability to make them because they made the 390E for the Lionel Classics line.

The other side of me hopes that the catalog has re-treads like the Ready to Run catalog. Nice stuff but not for me. It usually grows on me after I see it at a show or on eBay 50 times. But it saves me tremendous amounts of money to have things I DON'T like in the catalog.

The plain truth is that I'm just out of room and I need to really focus on fixing some of my classic standard gauge stuff. I want to start building my layout and I am really tired of dredging major amounts of cash on this stuff. I know, I am an insane collector that sneaks tons of stuff in my house. All that being said, I am getting near hanging my last shelf because my attic is stuffed to the gills. I really want to just run my stuff and my little house doesn't have enough room to let the standard gauge beauties get out and stretch their legs.

Ok, now that you know I am mildly insane, what are some creative and clever ways you all store your standard gauge? Any thoughts on new items in the catalog? 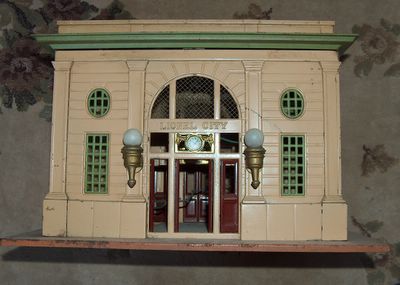 Hi All,
Gotta thin out some of my collection so I am putting some items up on eBay. No, this isn't a cheesy plug for my items. I put up a 113 Station as well as a 115 Station. I would rate this for fair to good, they have a some scratches and the wiring looks like crap.

So how much does everyone think these things are worth? Any ideas? I hate selling something on eBay for diddly and then finding out they were worth big bucks.

I'm also going to sell a Pridelines City of Denver. Any ideas on how much I should let it go for?

Posted by Standard Gauge Blogger at 12:52 PM No comments:

Got an email from Ted Maurer Auctions today. I can't go on March 19th to this but I would advise anyone that has a full tank of gas and a half full credit card to get there. I've been wanting some decent 10 series cars for a while.....

The link is above. If nothing else, it's great to see a big auction just before York. I probably can't go to York (again). Seems like every relative I have planned weddings and functions for April 2005. There won't be a single train in sight but I will have to see one of my cousin's Jello Molds. 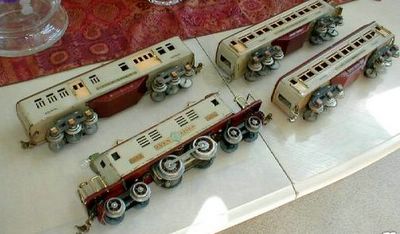 Wow! Here's one heck of a set! $17.5k is some serious cash but this set is in primo condition and the eBay seller is a solid guy. Has anyone made Pete an offer yet? Any thoughts on this amazing set?

What the heck happened to Pride Lines?

At one point, Pridelines was producting some nice stuff. They produced huge numbers of trolleys, the Ives 1764, Stations, Terraces. Some very nice (and very, very long) O gauge streamliners that I used to see at trainshows here on the East Coast almost every week leading up to Christmas.

I guess they are still selling stuff because their website is still up but nothing new has been added in well over a year. I have heard that their owner is having some health problems. I am curious, what's going on there? Does anyone know? Are they making enough off of manoil figures and cars to stay in business?

I guess what got me thinking about it was seeing that glass domed Ives station on out eBay. The asking price is much too high but the station is very nice, I think it was probably one of the nicest things Pridelines ever produced. Any thoughts?

PS Has anyone heard anything about T-Reproductions? What happened to Norm Thomas, is he going to produce anything else? I saw some very nasty stuff about him on the AOL boards. Chapter 11 and such....
Posted by Standard Gauge Blogger at 6:55 AM 2 comments: 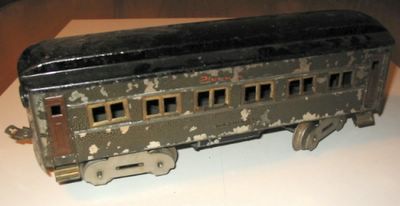 Then this car pops up. There are two out on eBay. I posted the link above. The thing I love about standard gauge is how I am constantly suprised. I never thought a mix of black and grey would yield an intereting passenger car. Yes, I am familiar with New York Central and how nice passenger cars look in NYC paint. But this thing kind of caught me off guard.

Yes, I know there is no likely prototype for this, although the paint on this is so darn compelling (as is the color scheme "Floridian" on other Dorfan sets) that it really caught my eye. Has anyone seen the entire set? 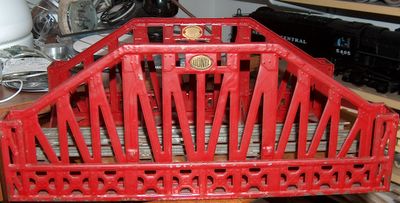 I grabbed a new bridge off of eBay. I don't have one of these and I think I can run some trains across it a little faster than one with approaches. I seem to remember this bridge in green.....

I like the paint on it (old and krinkly). It reminds me of some of the bridges in NJ and NY. i think I am going to have to clean up the track on it though. There's also some rust on the bottom (not too bad though).

Side of the Geiger Counter 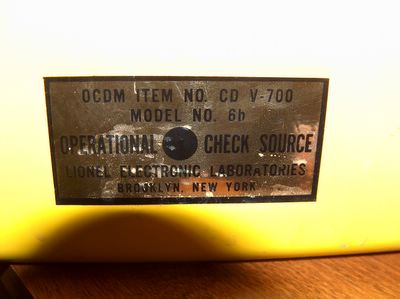 Here's the side of the Geiger Counter. Check out this link for some additional info! Apparently this thing is about 40 years old. 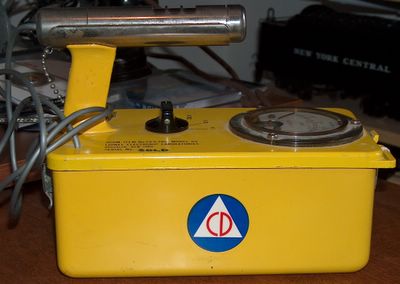 Just picked up one of these neat old Lionel Geiger Counters. I like the whole cold war vibe/civil defense stuff on the side. I haven't tried it out yet.

My son couldn't figure out what it was. He said it looked like something from The Incredibles movie. Kind of a neat old relic, I wonder where it was used?

Posted by Standard Gauge Blogger at 3:14 PM No comments: