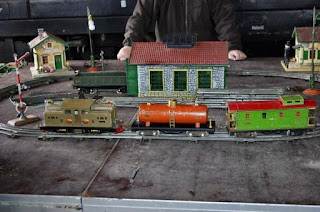 Here's a neat little pic of some standard gauge running in Germany from Michel.  You know, the funny thing is, whenever I see Marklin, Fleischmann, Bing or whatever rolling it just blows me away.  The style, the sound, the color.  Kind of like when I see a really rocking and rolling standard gauge layout.... Guess I just like trains! 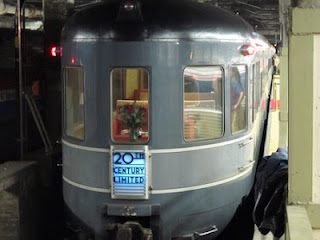 Ok, if you are averse to strong language, then stop right now.  Don't go any further.  Close the page, and wait for the next post or posts that I make.

The above picture from the event website was about as close as I got to a train yesterday in Grand Central (outside of taking the subway there).  I figure between subway fare, car parking and gas (excluding food), I probably paid $115 to go to this event.  Excluding the weekend time.

I got there and a whole bunch of FAT Grand Central employees told me to come back tomorrow morning at 10 am!  On Mothers Day?  Are they kidding?  They said the response had been "overwhelming", waits were too long and that they couldn't handle the volume.  Oh yes and backpacks weren't allowed in the event as well even though backpacks, luggage and pretty much every form of storage was flying through Grand Central outside of this event.

Two words for the people that put together this event: Fuck you.  From the overweight GC employee telling me "It is what it is." to the other 4 fat guys I asked and got no response from, fuck you.  For the no reimbursement for my time and effort in getting to NYC to see a couple of train cars with my son: fuck you.  To deal with walking through about 2000 screaming kids and there parents trying to dial them down in Grand Central: fuck you.  For the cops standing around on my tax dollars like morons: I know you were on orders, so I'll cut you some slack.  Although I have a feeling you were standing there because guys like me were pretty pissed off.  For the legions of senior citizens that were there that went to considerable effort to get see some trains from their youth: Fuck YOU Grand Central screw ups!

Here's the thing: it's an event, it's in Grand Central and it has been done many times before.  You aren't inventing anything new: not a new technology, not a new process.  Nothing.  People wait in line at Disney all the time and they still get in, no matter how many people are in the park.  It's been done before.  A lot.

So Parade of Trains seems to equal Parade of Tools and Fools.  Not a politically correct bit of writing but it accurately reflects my feelings.  No more events at Grand Central for me.  The place has become an oversized mall that seems to be uniquely tuned to cater to the hedge fund managers that ride back and forth to Greenwich and Westport.  Enjoy.  I'll go to Pennsylvania and ride live steam there and see plenty of trains with no lines.

James Hall's collection has been out on this blog before.  He is just a great train collector and has one of the biggest and most important collections of Postwar Standard Gauge.  He posted a Youtube of his wonderful layout.  Be prepared to see some unique items.  He has the largest and probably the most well rounded collection of McCoy in the known world.  The one thing on this layout that I'd actually love to see reproduced and intrigues me more than anything is his Smith Metalworks engine house (it is red and white towards the middle).  It's just highly unique and (dare I say) rare....  I would recommend clicking on the You Tube and blowing this up full screen (don't view it on the blog).  Check it out.  It is pretty wonderful.  Thank you again for sharing this James!