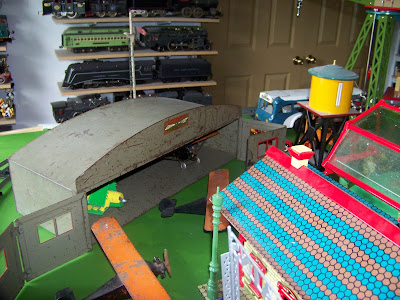 I miss my Buddy L airport but I absolutely love the Olsen Displays Tunnel on the layout. It's amazing how this airport fits right into the action of a train layout. Not quite prototypical but really fun nonetheless. 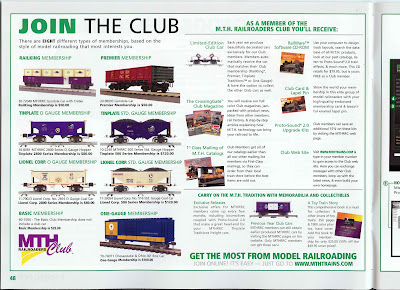 I've been looking forward to the Lionel Corporation Club car for 2009. And in MTH's new catalog (at the back), it looks like the 2010 club car is a hopper! All told, some very nice tinplate. I get a real kick out of the fact that there seems to be 4 tinplate cars and only 1 G-gauge car. I do really like the Lionel graphics on the car. Looking forward to the Lionel Corporation 2010 catalog. I hope Mike hits us with a 1-2 punch after the Brutes!

Collect With Your Heart 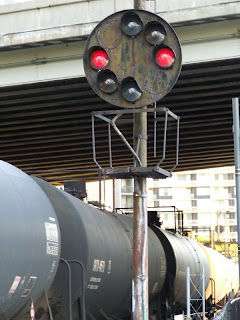 I've seen a lot of discussions over the years about toy trains as an investment. The New York Times has an interesting article today (click on the title link) focusing on the financial aspects of collecting rarities. The bottom line is that you shouldn't view your collecting as an investment for several reasons, including the difficulty of buying at the right price. The bottom line: “People who collect with their hearts are best at it.” This is because at least they truly enjoy what they acquire even if they don't make an eventual profit on their treasures.
Posted by Jim Kelly-Evans at 5:56 AM No comments: Links to this post 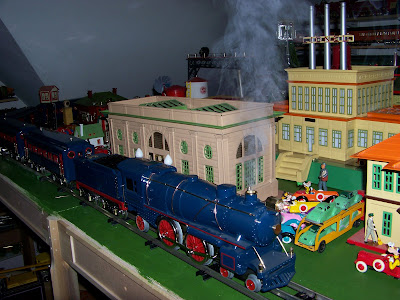 The Dorfan 1134 making a station dropoff. Almost November. I gotta get some of that Christmas smoke!
Marc 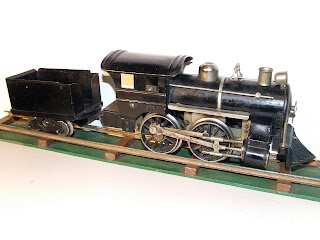 One of the great services offered by the TCA is their reference library and recently, the availability online to TCA members of scanned copies of all of the Quarterlys dating back to the first issue.

Here's a tidbit from the January 1960 issue. Oh, if only we could turn back the clock!

Al Roth is thinning his collection,dups,
color variations, etc. Howard, Elektoy,
Knapp, C&F, Ives, Lionel and good old
Voltamp.There will be also odds and ends
of separate locos, cars,and accessories.
Some catalogs, tremendous amount of parts.
Indicate your wants now..
Al is having a get-together in Baltimore
at Munder's Lauraville House Aug.6,1960.
Lunch and dinner at nominal fee.. Make
reservations early as there is space for
only 75. 3401 Parkside, Balto 14, Md.

Posted by Jim Kelly-Evans at 9:56 AM 2 comments: Links to this post 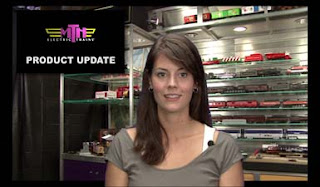 Check out MTH's York booth here. You get a nice birds-eye view of the MTH-Lionel set up along with a few shots of the Brute. All told, I have to say this is one of the more spectacular booths I have seen in many years of attending trade shows and train shows.
Very cool. 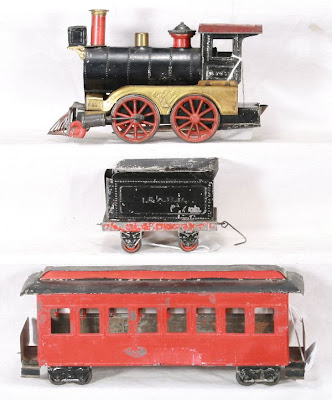 Always worth a look.

Well, I apologize for the dry days of no posts, I have this really nice Kodak camera that takes great pictures but eats batteries for lunch. I bought a really expensive battery at one of our nationwide electronics stores. I charged the battery, put it in the camera and I can take about 5 pictures before it goes dead. It isn't the camera. I took the battery back to the store and they told me "30 days and you own it, we don't stand behind rechargeable batteries". Essentially making it difficult for me to take pictures.

Thus I found the same batter on eBay for 1/3 of the price with a longer warranty. Ergo, I should start posting soon.

I just took delivery of the amazing Olson 123X tunnel. For slightly under $300, this tunnel is sure to be a classic. Some pictures are coming up shortly (as soon as I get the battery from the store in Boston). Brian Olson is really an artist, I can't say enough good things about these people and the quality of their work.

York is upon us as is the season to aggressively play with trains. This week on my layout I've been running a Gunmetal 385E and Ives Transition cars. It was almost painful to take them off. I'm putting on a Dorfan steamer and some passenger cars though, I really enjoy watching the Dorfan steamers chug around the layout. I'm also pulling a station this week and probably putting up the Hellgate bridge. I'll post some pictures.

I've watched a ton of chatter on the Tinplate Forums. Pretty good stuff. I was very greatful for the advice on the Gargraves track. I'm still mulling it over. I like switching and I can't do any switching with the 5 rail track. I can however, have fewer derailments and better conductivity. So we'll see. I have enough Gargraves track to do the whole layout. I guess I just need someone to talk me into it! ;)

Looks like the Brute is starting to ship according to Charlie Nassau. I like Charlie. He's always what I think of when I see a reputable train dealer that cares as much about his customers as he does his own store and emloyees. I'm still trying to figure out how I am going to pay for my Brutes. Insane? Yes, most definitely. I've sat way too often with people that didn't buy a train when they had the chance or missed an opportunity. I know, it's stupid. I've been waiting for these engines for over 10 years. As soon as I saw the real Brute I wanted one, I just couldn't afford a half million bucks! I know this is going to be a terrific engine and I'll post a review as soon as I scare up the funds to pay for it.

Comments? Thoughts about the upcoming train season? Surely there must be some speculation on the new Lionel catalog ala MTH?