Coming up at York

Honestly, I used to remember York fetching significantly more fanfare than it seems to be catching now.  This one little item is kind of exciting though: MTH is releasing a new Tinplate Catalog at York. 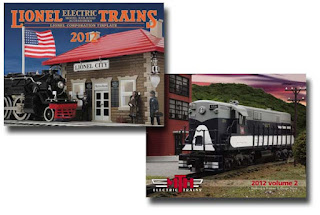 This is still a marvel to me.  That even in 2012 tinplate trains are still getting produced.  I have to say, even if MTH has one gem like the Chromate Brute cars (or the Brute itself), I shall be very excited about this catalog.  I know, it takes MTH a while to produce the promised products in the catalog.  Yes, I know, they come from China and some people don't care for foreign production.  Yes, I know, many folks would rather have original Lionel or Flyer.  I've heard it all before, numerous times.

Regardless, I think the new catalog is a great thing and I am looking forward to it.  Why?  Well because I like things like Chromate Brutes and oversize cars.  Those are things other manufacturers didn't have the guts to do.   And let's not forget one very big thing: when I started collecting these years ago I didn't get a shot at $15 State Sets.  When I'd go to a show or an auction the average price of a decent green or brown State set was in the neighborhood of $15k.  The Blue Comet sets were a "steal" at $7.5k.

Um, right.  So you can go and pay $15k for a State Set.  I'll take the MTH one for $1500 bucks.  Trying to find a decent Armor Train in O gauge?  Go ahead, even with mountains of cash you may never find a decent set.  I'm thankful that Mike and his team are working for us!

Looking forward to the new catalog!

I think York suffers from the use of the Net as much as anything. For a number of years I belonged to the TCA and other train collecting clubs, went to meets as often as I could. Then came along Ebay and many other toy train related sites. I belong to no clubs, and go to few if any meets, and still get most of the stuff that I'm looking for