One of the definitions of inflection is "a bend or an angle" and I think you know what reflection is. I started looking at my huge collection of toys and trains some months ago and couldn't let go of the old Ward Kimball saying "He who dies with the most trains wins." I'm not particularly fond of that saying even though I was very fond of Mr. Kimball.

I have a strong preference not to be dead and not to leave a mess for my family when I do move on. More importantly, I have a very strong need to be able to run and enjoy my trains while I am here. So in essence, the saying does mean something very positive to me, I want to play as many toys as I can with my family as long as I can.

Thus I came to a fork in my road almost a year back. Looking at my collection, I had three, four and five of the same sets, stuff that wasn't working, stuff that was working but was too big to run, stuff that I didn't really like but rounded out a collection and on and on. I decided to pare down the collection significantly.

I feel lucky because I've had some of these iconic toys for so long. An original Brass 42 (all original, nothing replaced), numerous trolleys, that big Dehanes F3 set and so on. So many of the toys are from my friends that have passed on like Jim Cohen and John Davanzo. As I pulled them out to give to NETTE I almost cried. I remember when I'd pick up some of them from Jim and we'd go have lunch at Katz's in New Haven. It was a solid "train day" for me. We talked about the Ives factory in Bridgeport, talked about Lionel made in Connecticut, talked about the trolley lines all over the Northeast and in NYC. It's a time and a place I'll never be able to replicate. Same for Dick Mayer and John Davanzo; two guys I spoke with extensively over the years and that are now gone.

I noticed a huge drop off in my "acquisitions" in the last two years. Money was a factor but so was just the quality and "kind" of trains that I was seeing. A repro 384e or 1835e or 400e just doesn't do it for me. And the originals are still worthy pieces but they are expensive and so much of the toy train hobby has become an acquisition based investment for dealers and buyers alike that it really robs it of any fun or interest. That's just not why I got into it. I also didn't get into it to have every variation of Blue Comet set either. That might be interesting for some, just not for me. I get just as much pleasure viewing an enthusiastic postwar layout as I do seeing a couple of old standard gauge trains knocking around on someone's attic floor (or better yet around a Christmas tree).

Now I do have room to run the trains I want to run. So look for my Apple Green 408e to pull some 400 series passenger cars out of the station shortly. The angle change or inflection for me is that it is time to run my trains. The reflection will come along with it. By the way, I'll keep posting to this blog as I run them. Don't hesitate to comment or give me your input as well. One of my favorite quotes from the Shawshank Redemption is when Morgan Freeman says "Get busy living, or get busy dying." It's one of of my favorites from Stephen King (yep, he wrote the Shawshank Redemption!) Living for me is being with the people I love and getting to play with my trains! 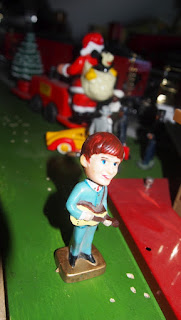 Here's one of the Beatles waiting to do a concert on my soon to be upgraded layout....

We hold our trains in trust for future generations.

I contracted with Nette in July to sell my trains. Now after 6 months I have not seen a penny. Numerous emails and calls go unanswered. Have you received any payment for your trains? I'm afraid we both may be stuck holding the bag.