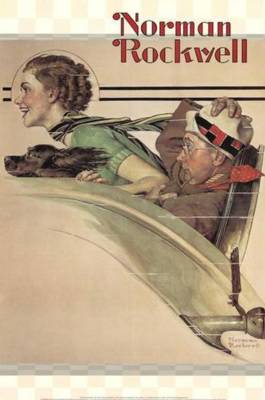 I had an interesting discussion this week with a fellow TCA Member. We were talking about the giant spectacle that is York, the formality and function of the Toy Train Museum in Strasburg, the fact that the gates to the parking lot in Strasburg get locked at 5:15 PM sharp on a Saturday afternoon, etc..

This friend is a charter member of the TCA and is one of my all time favorite people. He's forgotten more about trains than I'll ever know.

To make a long story short, he reminisced about the days of old when Blue Comet sets were a little over $30 at a TCA swap meet and most of the big "meets" were in someone's back yard. Not much was over $50 or $60 (those prices were kind of high) at an early meet (this was in the 50's) and everyone always left with a treasure.

If something was missing from a table, usually the money and a note was left on the table. Honesty was just something that happened naturally because you don't steal from your friends.

I sensed a great deal of sadness from him, he seemed to be saying that while he doesn't love or hate what his club has become, it has changed from the comfortable arm chair it was, basically a sharing of the hobby with friends, to discussions about standard comittees, bylaws and giant meets with thousands of people, dealers, events and destinations. What was supposed to create personal interactions and friendships still does, albeit with an ever growing membership that can't survive without growing even more.

He thinks that this may be one of the things that has driven prices of tinplate sky high in the last 25 years. Meets weren't about money, they were about exchanging ideas with friends, plus seeing and swapping trains that had never entered your concept of collecting. Many Voltamp and Boucher trains changed hands that will never get re-made today or even be seen today outside of a museum or a $25,000 eBay auction. They are just unusual items that just happen to also be beautiful toys. These kinds of trains were often the norm at an early meet.

Plus dealers were never allowed at early meets, it was just individual buyers and sellers. This is long before trains became expensive commodities that were manufactured somewhere else. The business of toy trains was kept seperate from the collecting of toy trains. The story of the actual train (in the early days) was as important as the acquisition of the toy itself. This was part of the lore of Standard Gauge and much of that lore is gone. Try asking where a vintage Blue Comet set has been or what "farm" it was found on. Good luck getting a real answer (once you get past the $7000 pricetag).

The point of this discussion is not to say that progress is bad but that sometimes the things aren't broken shouldn't be fiddled with. At the very least, history teaches us that some things actually do work and shouldn't be changed. The personal interaction of this hobby is one of the reasons I love it. I really enjoy talking to my old friend in the TCA - I am 39 and he is almost double that. His knowleldge and the things he has seen will never be replicated. Toss in some wit and a fair dose of wisdom that comes from a long life and your own perspective will change when you listen to some of the stories. . I really wish I could have gone to some of those early meets and hung around with the Louis Hertz's and the Lou Redman's.....

As it is with Standard Gauge....

PS I liked the Rockwell picture because it reminded me of what I would be doing if I were late for an early TCA Meet. Driving like a maniac.

It all comes down to Economics...

This belongs at the post about the Lionel Dealer Display Layout, but let us simply broach the topic by saying "The Times have Changed -- But Not for the Better."

Who actually "collects" this sort of stuff? Invests in, perhaps, but collecting Standard Gauge as a hobby is of an earlier era. Harry Osisek bought his National Limited for $35 in the 50's. This was an $80 set in 1930. Who will calculate the value of a Depression Dollar versus that of the Booming 1950's? And today you can have it for $25,000. [+/-]

Give me REPRO or give me Death!!!

50th Anniversary TCAQ Oct.'04:
[1962] "The Convention was electrifying for the Nor-Cal members who saw trains from the east they had only heard about like President's Specials, Blue Comets, and Ives National Limited sets, all priced around a $100."