Ives at the Toy Train Museum 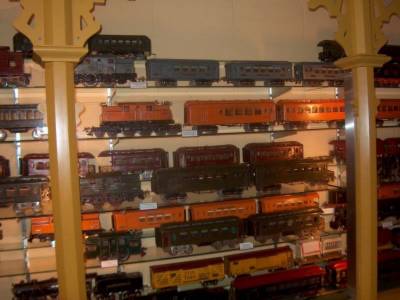 Here are some gorgeous Ives and Lionel sets from the Toy Train Museum in Strasburg. I am looking forward to all of the Ives and Dorfan Standard Gauge MTH is about to reproduce. I am excited to actually own some new standard gauge - most of the original sets (as seen above) are not in great shape. They've seen some serious play (scrapes, scratches and dents) plus the castings weren't always too reliable.

MTH seems to be doing a great job reproducing many of the classics as well as some "lost" classics (Dorfan engines, Ives cars, etc).

Outside of MTH, Joe Mania and Jim Cohen, who else is building new standard gauge? My favorite question is this: "If you could produce anything in standard gauge, what would it be?" The reason I ask is not arbitrary - I am considering building some of my own standard gauge and dipping my toe in the market.

- The Flying Yankee
- Budd Cars (ok, I'd also like to build some Interubans)
The Budd Cars are for the Post War side of me that doesn't feel like running Post War
O Gauge Cars
- The Aeolus
- The Mercury Set
- A nice Doodlebug (yes, I know McCoy did them and they are really nice, I just can't get my
hands on one)
- A handcar (yes, I know McCoy did them (and they are really cool) as well and I can't seem to
get one either)
- A subway (not the one's MTH is doing, one of
the first subways that had wicker seats).
- Any ideas? The subway below looks a little like
Joe Mania's Hudson Tube Train (can't wait to get my hands on one of those)!!
- What about rolling stock and passenger cars?
State Cars are nice but we've seen them run and reproduced so much....

I don't know why no one has reproduced the 381S double motored 381 prototype that is in the Shempp collection. You'd think it would be a natural - one one of the original, so no one has one, and the potential market is both people with original state cars and repro state cars. Not to mention all the 200 series cars you could pull with it. hell I'd probably buy one and I don't do anything made after WWI!

It's funny, I recall hearing about the 381S but I have never actually seen it. Where is there a picture of it? Can anyone send me the pic so I can post it for all to see?

Ok, found it. Here's the link:

Anyone been to this museum?

I never did see many of the Great Train Collections, and I keep kicking myself for not seeing Ward Kimball's, even though my few years in LA were not "train years". Nevertheless, as a teenager, I was lucky indeed to see LaRue Shempp's Basement of Wonders.

"The Brute" must be at the Lycoming County Historical Society. I went there four or five years ago. The installation is disappointing -- trains jammed together, no breathing room for the truly important pieces. And no guide that provides meaning for the trains. It's of real interest to the collector but I don't think it will do much for the hobby. Also, much of the Shempp collection was sold off [someone there told me this, along with telling me that the Historical Society bought what they have -- not a gift from Shempp]. Of course, LaRue spent all his spare money on the collection, so I suppose the family expected to Cash-Out.

Worth getting that book on the Shempp Collection [might as well get the Vickers one as well].