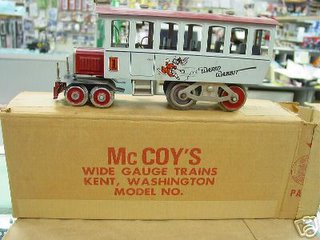 Wow! I was watching this thing on eBay! I had a bid on it for the last week and I thought it was high - almost 600 bucks. Way more than I should spend during the holidays (and while it's cold in the Northeast and the natural gas companies got me where they want me).

In the last minute this thing almost doubled in price.

Here's the thing, I know and like the bidders, so I could care less about who won the thing. I know who won the item and I am a huge fan. So who cares? Well, when I hear companies like Lionel saying that there is no market for standard gauge, I just can't figure it out. This item is broken, a little dirty and is not that old. Yes, it's still a work of art and way cooler than most of the trains on the market today.

Here's my point: this is a great train. If you make great trains, they will come. McCoy is only one recent standard gauge manufacturer but this isn't an anamoly. Look at the current JAD GG1 set out on eBay right now. That's a nice set. A little dirty, a little blemish. Not terribly old. And the bids are going up and up. It isn't a State Set, it isn't a Blue Comet. It isn't even a mint, boxed original.

Now imagine what a mint, boxed original Wappid Wabbit is going to go for....

Made in a chicken coop in America and worth every penny!