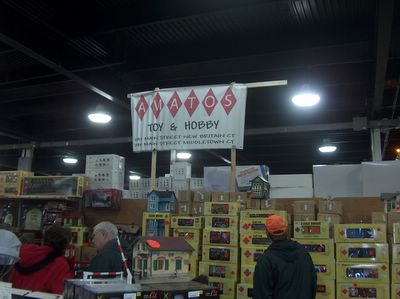 Amatos had a huge booth at the show. Most of you are saying: who the *$*#)@ is that? Well, I'll show you in the next few pics. They are really something.

But before I do, the showing from MA dealers was impressive, there were quite a few of them there and they seemed very friendly and ready to help. That seems to be quite the opposite for most of the dealers now-a-days.

I walked into several dealers in the last month and there are the typical scowling old men sitting behind the glass case. I know they are thinking that this kid is in here to look around and probably doesn't even have a starter set. There were quite a few of them at the show and I have seen many of them at TCA meets. These guys are train guys that say these are no longer toys, they are high priced collectibles and part of a grown up hobby. And humbug to anyone that doesn't think like them.

Remember, if a scowling old man is reading this: it's easier to attract bees with honey. My Mom always said your face is gonna freeze if you keep scowling like that. Guess it was true! Seriously though, I was wheeling my kids around the show today and while quite a few folks held the door open and were quite pleasant, an equal amount looked at me as though I dared to bring kids to a train meet! The nerve! Lest we forget, someone's gonna have to play with this stuff when we are no more.... Enough said.