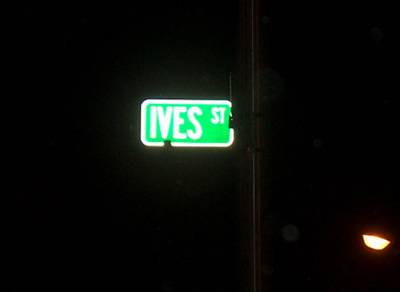 Again, here is another hint of the Ives family. No coincidence that this is a couple of hundred feet from the train station and that it is a really beautiful (and old) part of town.

Another parking lot? Just brilliant. Yet another place of huge historical value (I know it just looked like an old, beat up factory) that could have been turned into something very valuable. Now, it's crap.

The sad part of this is that this place (the Ives Factory and Bridgeport) is chocked full of history and interesting stories that should get told.

The Ives Factory was actually a printing place before they tore it down (McAdams & Sons Printing). There were quite a few folks that made pilgramages to the place before it was torn down and it yielded substantial parts and pieces for Ives Trains.

The watchman (for many, many years, he was actually there when it WAS an Ives Train Factory) was named Adam Pudm. I think he was Russian. Anyway, the stories about the burning catalogs are actually true, albeit slightly different than regularly told.

The actual truth is that Pudm would get to the factory very early, about 5 am. He had stacks and stacks of Prewar catalogs that he would toss in the furnace to get the light going (usually about 10 catalogs a shot). But this was when it was actually Ives.

Here's another interesting tale. After Ives went out of business and Lionel was pulling out of the building, collectors (this was before the TCA, although some of these folks actually founded the TCA) would go there on night runs to fish for parts, trains, whatever. They were locals so they new the guards, as a matter of fact quite a few of the "fishing guys" had long histories with the watchmen, some for generations. That's another story.

One night, they went fishing in the old Ives Factory and the watchmen told them they could go ANYWHERE except the 2nd floor engineering room. Guess which room they went to first? The second floor engineering room. Apparently that is where the ultra-rare Ives Interurban came from. Only one in existence and I have never seen but I have heard from one of the guys that had his hands on it that there was nothing like it anywhere, period. Remember, these guys are all 75 years old plus, so they have seen some things that us youngsters couldn't touch.

Here's another interesting story: briefly after Lionel pulled out of the factory, many of the folks that were left were burning excess inventory they found in the factory (feel free to grip your heart and cry at this point). They had huge stacks of stuff on fire in front of the factory and they found some additional items, specifically the Ives TreasureChest!!!!!

Now let's hold on a minute. Lionel 2 7/8 is rare. The Harmony Creamery Car is rare. The Ives Tomato Soup car is rare and so are Lionel and Ives Interurbans are ridculously rare. The Ives Treasure Chest is the top of the heap. As I recall (and I don't profess to be a pro at this), the Treasure Chest was basically a complete train layout and everything needed in one box. This wasn't just a couple of licks of track and a transformer, this was a complete setup (trains, accessories, everything) in one box. This was really something.

The guy that owned the service station across the street (now they're called gas stations, service is only a happy memory) walked over and asked if he could have it. They gave it to him because it was more convenient than burning it! Just think about that kind of luck. A guy was standing at the right place and at the right time and acquired an incredibly rare piece of history. As I recall, one was recently sold at a Ralston Auction (I don't know for how much), if anyone has the pictures or links please let me know, I can assure you that it didn't go on the cheap. I would bet that the Treasure Chest that was auctioned off was the same one that was saved from fire after the plant was shuttered.

my understanding is that the ives interurban - at least the red and black one that was sold by Ralston a few years ago, was made up in the 60's by some guy. A friend of mine claimed to know him and he actually went to the auction to buy his interurban back, but only for a price of a made up piece. It went for the price of a prototype piece. BUT this may all be BS as my friend is not the most accurate source there is. But you may ask, if the interurban is a legitimate piece, and was made very late in Ives history (as evidenced by the car body type) why would the then-faltering Ives company try to make one when Lionel, voltamp, Finch, and Ives (810, 809) had all given up making trolleys and interurbans at least 10 years prior?

I can't speak to your specific Ives Interurban but I do know that the one that was pulled out of the factory was authentic, I spoke to one of the guys that was actually there that night.

Also, he had told me that this wasn't a new production peice, this was something just kind of hanging around their engineering/R&D area. He said with the aging it could have been hanging around between 10 to 15 years.

There were other items that he didn't remember but he did say that several other items came out of the room at that point.