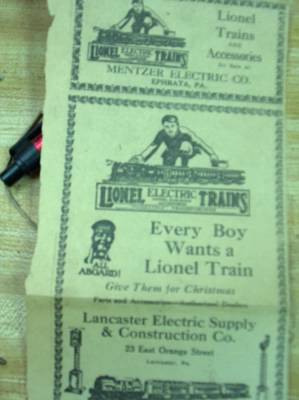 This is really cool - a little strip in a PA newspaper that highlited the virtues of Lionel and the dealerships that supported them. Makes you want to go back in time and see what these stores were like. I bet they were nothing short of amazing.

I remember going to some really amazing toy stores when I was a kid. There's a really good one in Connecticut (with some new standard gauge trains!) called Amatos in New Britain, CT.. Kids are getting gypped these days, they get a big old glossy flyer from a toy store in the mail and then get treated to a festival of plastic and polymers with some computer chips thrown in for good measure.

Heck, the above stores were not even toy stores and I still think there had to be more interesting stuff there than in a modern toy store. Let's face facts; in the past ten years, I have gone to many Hess Gas Stations, not because I like frequenting gas stations but because I like the single truck they sell once a year. Imagine a whole bunch of amazing trains.....