Dorfan - What could have been? 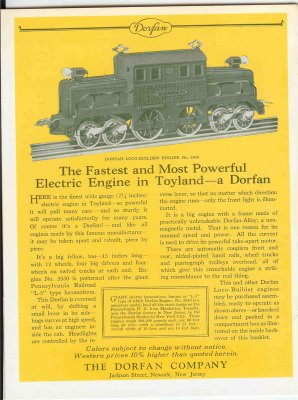 There's no denying it, Dorfan Trains are some of the most unique trains ever developed. If only the castings had been better developed.

I often wonder what an innovative company like this could have done with some venture capital and a little better marketing with some less lethal rivals (like Lionel).

It's signficant that we have MTH and some smaller manufacturers building standard gauge but it must have been really exciting to have multiple manufacturers developing these toys in the early part of the 20th century.

I wonder what would have happened if companies like Dorfan had been allowed to develop their products unfettered by the economics of the times?

The Dorfan lithography was really amazing, especially on the freights. Maybe some standard gauge with less rivet detail and more litho?