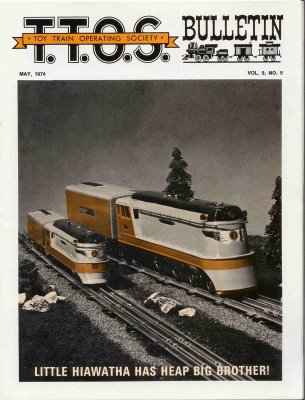 I've seen quite a few speculations about JAD in the Tinplate forums. Here is the TTOS Bulletin where the first JAD Loco (the Hiawatha) was introduced.

Check out John Daniel's (it's Daniel by the way) introduction to JAD. This is a small part of the story of Daniel and the various toy train hobbyists in California. I've heard some good stories. They were a very, very creative bunch (think Dick Mayer, Ward Kimball, John Daniel and on and on).

Check out John's write up below.

PS Join TTOS and be part of a whole bunch of people that are also nuts for standard gauge stuff (and tend to take matters into their own hands!) 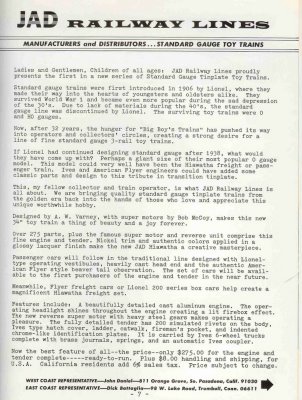 Hi, I am the son of Dick Battaglia, he was the "D" in JAD and Art Varney was the A and John Daniel was the J.
My father was the last remaining partner until his passing last year (2014).
I actually have that TTOS you have posted right next to me along with a lot of JAD memorabilia from that time, including NOS trains.
Anyway, if you have any questions you can email me at sean.seafood@yahoo.com.