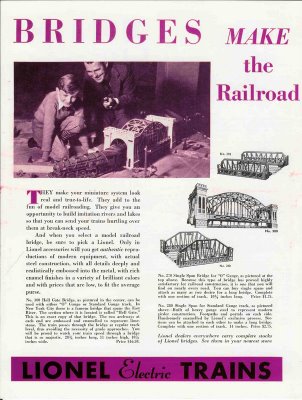 I like bridges. It's one of the reasons why I love New York City. You can have the restaraunts, the Bohemian lifestyle. I'll keep the cornbeef sandwiches, the bridges and the trains.

If there is one place I'd love to see some innovation, it is in the bridges. I'd love a Brooklyn Bridge. How about a standard gauge Bascule Bridge (saw one the other day when I was driving by Newark Airport). I drove by the Brooklyn and Williamsburg bridges yesterday on the FDR (yes, I also saw the Hellgate). They would look great even in an abbreviated form (as standard gauge tends to do). Plus instead of running JUST to Ward's Island (like the Hellgate) they also run to a slightly more populated area.

I'll try and dig up some pictures of the old Dorfan and Ives Bridges. They were nice but they couldn't handle heavy motive power or anything going fast. They are generally missing most of their paint but they had a quaintness about them that was always kind of nice. Go easy on the old Hellgate. It's getting overdone.

Bridges are great.
I ride my bicycle over the WillyB and 59th St bridges all the time.

The artist Chris Burden has done some interesting stuff with toy bridges.

I saw the show of Meccano bridges at the Gagosian Gallery. They were OK but not what I'd call "art". The real disappointment is that none of them had any functioning purpose. That is none of the toy bridges had trains or vehicles operating over them, whic made them lacking.
But a nice try.