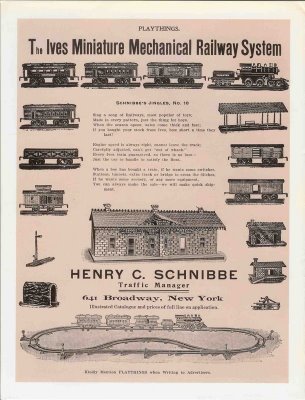 Ives got it. A "system" in 1909. We all assume trains are now made in a system. But with different means of control (TMCC vs. DCS) and different radius of track, high rail vs. low rail (or whatever isn't "super detailed") can anyone claim to have a system?

Does system mean ecosystem or was it just a clever way to sell trains 100 years ago? I like it, at least conceptually. Plus I think the advertising is neat. Better than the current dribble from toy companies and/or utter gibberish like drug/car/home improvement or whatever companies.

Should new trains and toys be made as part of a system? Seems like the concept has been lost (except by wildly successful companies like.... Lego).