Cold Spring and the Hudson Valley 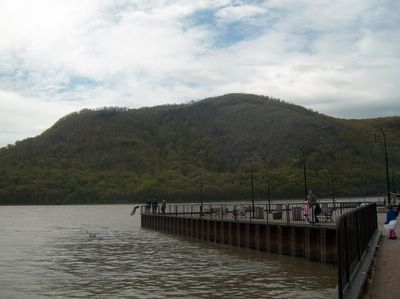 I have a few more interesting pics that I'll post later but I wanted to get this one up. This is one of my favorite views on our little planet. It's the Hudson River from the shores of Cold Spring. I know most everyone is heading someplace this summer (if you can afford the gas) and the Hudson Valley is a good place to vacation. For folks that appreciate history and trains, there is a tremendous amount to do.

This is just one little part of the Hudson Valley, you can also go up and tour Franklin Roosevelt's house in Hyde Park or go see the Vanderbilt's Summer Mansion right down the street. West Point is always interesting and there are a ton of train related tours and excursions via the Metro North.

Off the beaten path (and this is where it gets interesting), there are some major ruins and haunted places in the Hudson Valley as well. Bannerman's Castle is just up the river from Cold Spring and there are now tours you can go on. When I first saw it during the winter years ago, my wife thought I had lost my mind (a castle in ruins on the Hudson River?) Ha! I'm not crazy! Now there is a drive to preserve the castle and there are daily tours of it. It is one super-creepy place. There are also walking tours of haunted Cold Spring.

By the way, there are train shows in the Hudson Valley and quite a few interesting and ancient trains crawl out of the woodwork. There are huge old Victorian homes all over the place, most of them are owned or occupied by descendants of the original owners or by long running associations with the property. Bob (the owner of Once Upon A Time) told me about many homes he has been to where he opened a door or went into a basement and saw room after room of standard gauge trains. I'm not talking about a TCA member, and I'm not talking about a couple of 500 series boxcars either. I'm talking about a very old guy that was there (and rich) when this stuff was made and bought them en masse.

Bob told me about a guy that had a bunch of Blue Comet sets. He apparently passed away, the pipes burst in his mansion and his heirs asked Bob if wet Blue Comet sets (rusted) were worth anything. Makes ya want to cry, doesn't it? Oh yes, Bob told me that same guy collected Lionel Trolleys (the standard gauge kind) and those weren't wet. Who knows where they'll show up? Believe me, I have done a few cursory explorations of some of the mansions through the Hudson Valley (just do a Google search on Hudson Valley ruins or mansions). There is a ton of standard gauge that has yet to be found.

Get out and do some exploring -