The Last of The Toonerville's 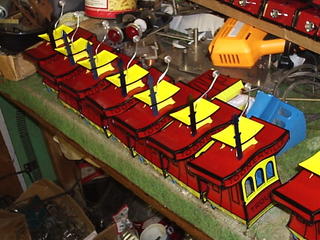 As the story goes, Ward Kimball and Dick Mayer were sitting around one night having a couple of drinks (and getting kind of sauced) when they thought it would be amusing, entertaining, downright exhilarating having a Toonerville Trolley running around a standard gauge and O gauge track.

I read an article about it in Antique Toy World (March, 1988, Volume 18, No 3) by Ward Kimball himself. It got me kind of intrigued so I actually waited a while and bought one off of eBay.

Dick Mayer actually designed this thing with Lyle Cain! The original Toonerville's were floor trolleys and there is a rare O gauge clockwork version as well. Dick is the only guy that can make these, the four color paint and seperations alone are too hard for most train manufacturers to handle. The Trolley was actually made from a Toonerville floor trolley that was taken apart and and used as a "prototype" of sorts. It also uses a worm gear to drive the unit as well as simulate some kinetic action. There's also a fold out depot and cut out characters. All very cool in their own right.

This is probably the last time we will see this ever. Dick wants to move on with his life and relax. Building these things is extremely hard work. I know I have lamented this before but it looks like we are at the onset of a lost art. I hope we get more artists to render their imaginations into trains....

For anyone interested in Toonerville Trolley there is a quarterly newsletter called The Toonerville Times with lots of colored pictures and stories about the Trolley and Fontaine Fox, the artist.
Contact wtait@vzavenue.net for more information.